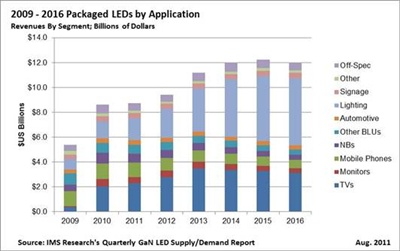 Despite sharp growth in general lighting applications as LEDs emerge as viable replacements for conventional lamps, the overall market for nitride-based LEDs will be virtually flat this year, according to the latest update from IMS Research.

Analyst Ross Young from the company says that growth in the TV backlight market, which has been responsible for a huge increase in unit shipments of LEDs over the past two years, will be lower than previously expected.

Coupled with the massive hike in LED manufacturing capacity since 2009, which has resulted in an oversupply of LEDs this year, this has pushed down prices and effectively canceled out the gains from increased volumes. Young now says that the market for packaged GaN LEDs will be worth $8.7 billion in 2011 – just 1% higher than the 2010 figure.

Although the blended average for all LEDs shows a decline of 21% this year, in certain segments prices have declined by as much as 44%. That impact has been felt particularly in backlighting: “All the LED backlighting segments are expected to fall in revenues in 2011 – except for TVs, which are now expected to rise 13%,” Young said, pointing out that the TV sector had still not risen as much as previously expected because of a wider weakness in consumer spending.

Young has trimmed his expectations for LED penetration in TVs from 45% to 43% this year, and from 73% to 68% in 2012, as this element of the market moves towards saturation. He also points out that LED backlight penetration of notebook PC displays reached 100% for the first time in the second quarter of 2011.

Lighting up
But in lighting applications, where high-quality LED chips are required and price declines have not been so steep, the story is different. The lighting market is the fastest-growing application for nitride LEDs, expected to rise 24% and be worth $1.7 billion this year, equivalent to 20% of overall LED revenues (compared with 16% in 2010).

However, LEDs still only represent a tiny proportion of the overall lighting market, with the technology expected to take just a 1% unit share in 2011 according to IMS Research – meaning that growth in general lighting applications will increasingly drive the wider LED market. “We expect faster revenue growth for packaged LEDs through 2015, with both backlighting and lighting growing in 2012 and 2013,” said Young. As backlighting matures, lighting applications of LEDs will off-set declines in backlighting in 2014 and 2015, by which time all of the panel backlighting segments will be saturated.

But after that, Young sees the LED market begin to shrink, explaining that although lighting applications will still be growing, that growth will slow down, and be unable to off-set the backlighting impact that will be worsened as organic LED TV screens start to take a significant market share. The packaged nitride LED market will be worth $12 billion by then, he predicts.

Young told optics.org that AMOLED TVs still face some key challenges, however. “For AMOLEDs to take significant share in TVs, they need to be able to replace the LTPS backplane with an oxide TFT backplane,” said the analyst. “If they can achieve this at sufficient yields, the TV market could move to AMOLEDs rather quickly. We expect to see some [AMOLED TV] volume next year with an LTPS backplane and start to see oxide TFT volumes as early as 2013.”

But as far as organic LED lighting applications are concerned, Young echoes an earlier analysis by Lux Research. He predicts that the approach will remain a niche technology while the current momentum in inorganic LED technology continues to drive improvements in quality and efficiency, coupled with rapidly falling chip and component costs.