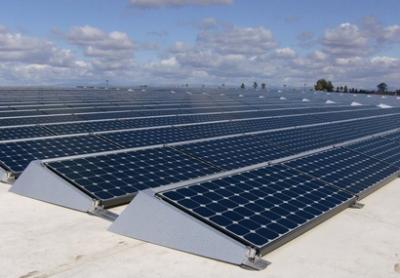 An increase in sequential revenues of 30 percent during the second quarter of 2011 was not enough to save SunPower from a quarterly GAAP net loss of $147.9 million, a bruising hit compared to $2.1 million loss in the previous quarter.

The solar panel developer saw quarterly revenues reach $592.3 million, up from $451 million in Q1 and from $384 million in the same quarter of last year. But events elsewhere caused the damage.

"These results are unacceptable," CEO Tom Werner told analysts, stressing that policy changes and shifting demand in Europe had upset the company's plans and derailed its earlier optimism.

SunPower's problems included an accelerated sale of several company-developed power plants in Italy as a risk mitigation measure, which yielded cash flow but at margins which were lower than anticipated. Meanwhile, the modest pickup in demand in Germany and a slower than expected recovery in the Italian market led to the delaying of both residential and commercial sales.

The company also took on a bad debt expense of $5 million and a $7 million Malaysian foreign exchange expense, all on top of a $32.5 million charge for the write-down of third-party inventory and termination of cell contracts.

Werner outlined the company's three-step course of remedial action. "First, we have significantly restructured our European organization to focus on residential and commercial segments; second, we have accelerated our cost reduction program; and third, we are tightly managing our working capital with strong progress on inventory management."

SunPower has also made the decision to exit its third-party cell contracts during the coming quarter, believing it now has sufficient capacity in its cost structure to meet the needs of customers, although it may continue to buy third-party panels if future project development requires it.

"By the end of 2012, we expect to complete a 15 percent step reduction in all three of our fabs, accelerating our entire plan by six months, and resulting in materially lower costs in 2012," commented Werner. "We also made the strategic decision to reintegrate panel manufacturing to meet North American demand, and moved to a panel manufacturing facility in Mexicali, Mexico, to complement our Silicon Valley manufacturing investment. We expect to address Europe in a similar fashion."

Total impact
SunPower recently received substantial investment from Total, when the oil giant lined up a 60 percent equity stake in the company and promised a $1 billion line of credit over the next five years. That partnership is now taking shape, according to Werner.

"In July we agreed to a number of strategic initiatives in areas such as balance sheet improvement, R&D collaboration, expanding key markets, as well as leveraging both companies' vertical integration activities. We have just signed our first letter of credit facility guaranteed by our $1 billion credit support agreement with Total, which has improved our liquidity by making available approximately $200 million of previously restricted cash."

A joint R&D team is identifying opportunities for leverage of Total's solar investment, which Werner expects to yield results in both technology and upstream capabilities in 2012. The two companies are also discussing a number of large-scale projects in new and emerging markets.

"We are working closely together in order to leverage Total's other solar investments, including their ownership of Tenesol," noted Werner. "We expect to start formal due diligence related to the potential acquisition in late Q3 2011, once the European Commission has approved Total's full acquisition of Tenesol."