Impacted by a slow market in Asia and even worse results than it had forecast, the LED maker sees its valuation drop once again. 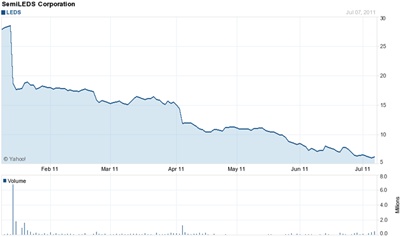 The only way is down

SemiLEDs, the LED chip manufacturer with operations in Taiwan and a joint-venture with the Chinese government, continues to see its market valuation slide, amid weak demand and pressure on prices.

The company, which listed on the Nasdaq after raising $80 million in an initial public offering (IPO) of stock in late 2010, has just posted a net loss of $5.1 million on sales of only $5.6 million for its third fiscal quarter of 2011, which ended on May 31.

That was a worse performance than had been predicted by the company’s management, and further depressed a stock price that has now lost nearly 80% of its value since the end of last year.

CEO Trung Doan said that the market remained challenging, especially at the chip level, which accounted for 58% of the company’s sales in the latest quarter. Average selling prices declined by nearly 10% during the period, which was at least at a slower rate than had been seen in the prior quarter - something that Doan is viewing as a positive sign.

Streetlights at the end of the tunnel?
And although he says that the market for LED-based streetlights remains weak in Asia for the time being, Doan is hopeful of that changing as the Chinese government’s latest five-year plan, which calls for adoption of high-efficiency lighting technologies, begins to kick in.

Doan said that the local government in Foshan, China, has plans to upgrade 100,000 streetlights with solid-state lighting, starting towards the end of this calendar year. The company’s China SemiLEDs joint venture with the Chinese state (SemiLEDs owns 49% of the JV) is based in Foshan and likely to benefit directly from that initiative as the local technology supplier.

In the intervening months, SemiLEDs is converting its chip manufacturing facility in Hsinchu, Taiwan, to produce LEDs on 4-inch wafers (the Foshan site already uses this format). At the moment Hsinchu is running at a utilization capacity of only 40% because of the weak demand, which should at least make the transition a little easier to manage. By the end of 2011, Doan expects half of the company’s Taiwan output to be produced in the larger format, which should generate a major saving on manufacturing costs.

But things are likely to get worse for the company before they get better. For the current quarter, SemiLEDs is forecasting only a very slight increase in revenues at best, accompanied by a widening net loss of between $6.4 million and $6.7 million.

On the positive side, SemiLEDs does still have a strong cash position thanks to the IPO in December 2010. As of May 31, it listed $94.4 million in cash on its balance sheet, having burned through $3.3 million in the latest quarter. Overall, the company currently has a market capitalization of around $165 million.