Large-scale, non-residential PV projects built in the US between now and 2015 will produce as much power as Germany's existing installations. 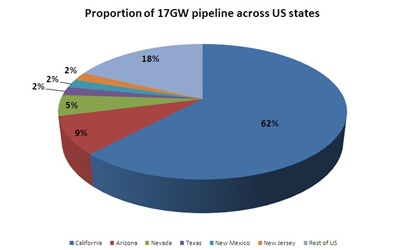 PV pipeline break out by US states

Aided in no small way by substantial loan guarantees signed off by the Department of Energy (DOE) last week, the pipeline of non-residential photovoltaic projects set to be built in the US between now and 2015 has grown to 17 GW.

That figure comes from the July 2011 edition of a tracker report covering US deals released by the analyst company Solarbuzz, and shows why the PV industry increasingly sees the US as the next big market for the technology, as Germany winds down its subsidies and confusion remains over Italian policies.

To put the number into context, Germany, which has installed far more PV than any other country thus far, currently has an estimated total peak PV generating capacity of just over 17 GW, after record installations of 7.4 GW in 2010. That is according to the most recent market overview from the European Photovoltaic Industry Association (EPIA), which also states that around 2.3 GW of PV capacity had been connected to the Italian grid by the end of 2010.

California dreaming?
Solarbuzz has identified 601 major PV projects, ranging from 50 kW to 500 MW in peak capacity that are set to be installed across the US between now and 2015. Nearly two-thirds of the total 17 GW installations are set to be constructed in California.

California has an aggressive plan for renewable energy generation, setting a target of delivering 33% of its electricity from such sources by the end of the decade. Aside from its largely sunny climate, the state has extremely high electricity prices compared with the US average – particularly in the summer - meaning that renewables can become competitive with conventional sources at a much earlier stage.

The Californian PV pipeline of just over 10 GW should provide a significant chunk of that 33% target. According to the California Energy Commission, the state’s annual electricity supply is currently around 300,000 GW-hours. Extrapolating from DOE estimates suggests that a 10 GW peak supply from its various PV installations should deliver around 25,000 GW-hours per year [the estimates assume peak output for an average of about 7 hours per day], or 8% of total electricity – not including residential PV generation.

EPIA’s estimates show that the US already has some 2.5 GW of PV capacity installed, after adding around 900 MW last year. Solarbuzz is anticipating the US PV market to be worth 2 GW in 2011, with EPIA suggesting somewhere between 1.5 GW and 3 GW. Those figures include both residential and non-residential installations.

In terms of module suppliers, the chief beneficiaries of the pipeline of large-scale projects will be First Solar, SunPower Corporation and Suntech Power – all three of whom are already ranked among the top five providers globally.

Approximately half of the 17 GW pipeline is concentrated among just 12 project developers. Just last week, the DOE said that it would bankroll three very large Californian projects involving First Solar by providing conditional commitments for loan guarantees of up to $4.5 billion in the event of a borrower default. Just those three projects alone are expected to deliver a peak output capacity of 1.3 GW once completed.

But fulfilling the projects will not be trivial and still presents some difficulties. Solarbuzz president Craig Stevens highlighted the alignment between projects and finance sources, regulatory challenges and sharp price changes within the PV supply chain as examples of likely problems.