Survey of publicly listed photonics companies highlights stellar performance by e2v, Renishaw and Andor since the start of the year. 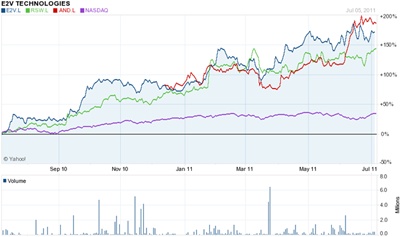 Shareholders in UK-based photonics companies have enjoyed extremely strong gains in the first half of 2011, with three UK firms increasing in value by around 50% since the end of 2010.

With stock markets making gains in general (the Nasdaq composite has increased 6% in the first half of 2011), the majority of photonics stocks surveyed by optics.org showed a gain since the end of last year. Of 55 listed companies, 35 have gained value while only 20 are now worth less than they were on December 31, 2010.

Of the UK firms, the image sensor manufacturer Andor Technology was the strongest performer. It gained 55%, with shares rising to a price of 631p on the London Stock Exchange – valuing the company at around £200 million. e2v Technologies, another imaging sensor provider, whose customers include NASA, rose by a similar amount and is now worth around £300 million.

The metrology and analytical equipment developer Renishaw, which recently announced a long-term expansion plan, is up 45% on the year so far, with its market capitalization in excess of $1.3 billion.

But those were not the strongest gainers during the first half of 2011. That was delivered by the small-cap dental laser company Biolase (up 205%), while the optoelectronic component maker Emcore gained 161% – although it should be noted that both of these companies have volatile stocks, and have been recovering from extremely low starting points. 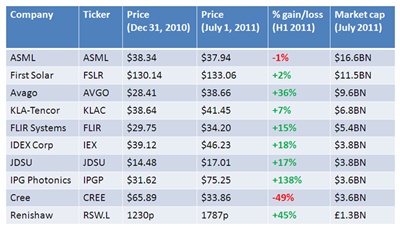 IPG rockets 138%
Of the larger photonics companies, the fiber laser specialist IPG Photonics was the strongest performer in the first half of the year. Shares in the Massachusetts-based company, which is spearheading the strong trend towards the use of fiber lasers for industrial welding and cutting applications, soared from $31.62 at the close of business on December 31, 2010, to reach $75.25 on July 1, 2011 – a rise of 138%. That growth has added around $2 billion to IPG’s market capitalization, which now stands at close to $3.5 billion, propelling the company into our top-ten list of photonics stocks by market value.

At the other end of the scale, shareholders in the LED manufacturer SemiLEDs have seen major losses. Despite making early gains after its initial public offering (IPO) of stock late last year, the firm’s valuation has crashed 77% since the start of 2011.

The company has been hit by extensive competition and falling prices of LED chips, a trend that has also seen Cree drop by 49% so far this year – although the Durham, North Carolina, company remains one of the largest photonics firms in terms of market capitalization, currently around $3.5 billion, and the ninth most valuable in our list (IDEX Corporation, which recently acquired CVI Melles Griot, is now included for the first time and ranks in sixth place).

Other optoelectronics companies faring badly in the first half included Oclaro, which also lost 49% of its value, Finisar (down 37%) and newcomer NeoPhotonics, which has fallen by 46% since its February IPO debut. 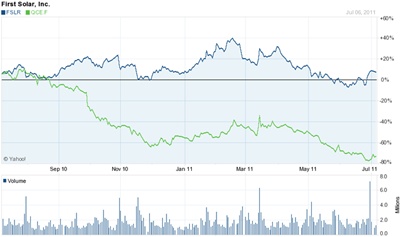 PV competition keeps Q-Cells depressed
Photovoltaics companies in the optics.org list have seen mixed results, but are generally down on a much softer level of demand for solar products in the first half of the year. That demand is expected to pick up strongly in the second half, but with stiff competition, most Western companies are under huge pressure to drop prices and eat into profit margins. While First Solar, which is already has a major price advantage through its domination of the thin-film sub-sector, is now back at virtually the same price as the end of 2010, trading in the stock has been volatile during that time.

Germany’s Q-Cells is suffering more than most in the face of state-backed Chinese producers, and its value dropped by 46% in the first half of the 2011. The company, once the world’s largest solar cell maker and still ranked among the top-ten producers, has lost an extraordinary 95% of its value over the past three years and the Frankfurt-listed company now has a market capitalization of only around €220 million.

Now valued at about $11.5 billion, First Solar is one of the heavyweight stocks in the optics.org list of publicly-owned photonics firms. In terms of market capitalization, it ranks second behind only lithography giant ASML ($16.6 billion). And following a 36% gain since the end of last year, the former Agilent semiconductor division Avago Technologies, which makes RF devices as well as LEDs, lasers and optical modules, is closing in on a market capitalization of $10 billion and ranks third.

Semiconductor equipment company KLA-Tencor and the imaging giant FLIR Systems are the only other two companies in the list to be valued in excess of $5 billion currently.

Data sources: Yahoo! Finance, Google Finance. Stock prices compared on December 31, 2010 and July 1, 2011. Our list of photonics stocks is intended to be illustrative rather than exhaustive.