ASML, the dominant supplier of lithography tools to the semiconductor industry, is still breaking sales records but seeing orders slow. 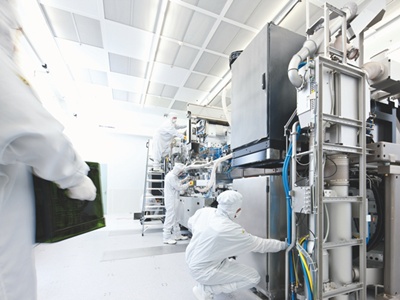 Lithography stepper vendor ASML remains on track for a record-breaking year in 2011, but order levels are slowing as its customers take time out to assess the likely level of chip demand in 2012.

The Netherlands-based company, which commands by far the largest chunk of the lithography market (the analyst company Gartner says that ASML sales alone amounted to 13% of all semiconductor capital equipment spending in 2010), posted sales of €1.53 billion in the second quarter of 2011. That just beat the company’s previous record total, and ensures that ASML remains on track for its best-ever year in revenue terms.

But while sales and profits remain very healthy, in his outlook CEO Eric Meurice sounded a note of caution, saying: “Our customers are currently taking some time to assess the semiconductor end-demand trends for 2012 before determining their overall capacity plans, levels and timings.”

The CEO stressed that although there was “growing uncertainty” regards end demand for semiconductor chips in 2012, and “significant customer hesitance”, he sees no sign of an impending slump in demand – more a pause until manufacturers get a clearer picture of how much they need to invest in capital equipment next year.

Meurice says that such a pause is not unusual, and, given the current macroeconomic uncertainty around the world, a logical step. He remains confident about the need for cutting-edge lithography tools, even though the uncertainty is likely to last until at least the final quarter of this year.

By then, ASML’s customers will also be forced to makes some firm decisions about how many EUV lithography systems they will need to purchase. In an investor call to discuss the latest results, EUV progress and customer traction was a popular line of questioning for the CEO, and Meurice admitted in candid fashion that ASML’s customers want to see faster progress with these tools.

EUV traction
Meurice was also candid about ASML’s failure to recognize the full complexity of engineering suitably powerful and reliable EUV light sources, which has been the key problem hindering commercial deployment of the technology. Admitting his annoyance at this mistake, the CEO described how ASML had decided towards the end of last year to have a more direct control over light source development at its two major suppliers – Cymer and Gigaphoton.

As a result, ASML’s own people have taken over some project management roles to develop the sources, and Meurice says that progress since then has been more encouraging. The key aim for commercial wafer production is to reach a stable, long-lasting EUV output power of 100 W, which should translate to a production throughput of 60 silicon wafers per hour in the semiconductor fab.

At the moment, the EUV tools being tested in the field by chip manufacturers have only reached around 5 wafers per hour - indicating the scale of the challenge still facing ASML. In the laboratory, Meurice hinted that throughputs of 20 wafers per hour had been achieved, and said that lab performance was typically about three months ahead of the field.

The CEO also indicated that device manufacturers will have no real option but to adopt EUV technology if they wish to shrink feature sizes beyond the 22 nm technology node. That’s because although it is technically possible to make the smaller features with triple- or quadruple-patterning schemes using existing steppers, the additional patterning steps and requirement for many more layers of material in their semiconductor structures will make such an approach prohibitively complex and expensive.

“They have no real choice,” he said. “The only option would be not to shrink.”

• The microelectronics industry development center IMEC in Belgium is one of just three ASML customers already able to expose silicon wafers with an EUV lithography scanner, although its version of the tool does not feature a laser-produced plasma (LPP) light source like that developed by either Cymer or Gigaphoton.

IMEC’s is the only such tool to be based around the laser-assisted discharge plasma (LDP) source developed by XTREME Technologies – originally a joint-venture set up by Germany’s Lambda-Physik and Jenoptik, but now owned by the Japanese company Ushio. Interestingly, Ushio previously shared the ownership of rival EUV source developer Gigaphoton with Komatsu, before withdrawing from the joint-venture in April 2011.

Now IMEC says that the XTREME source, which uses a laser pulse to trigger a tin plasma discharge, offers a route to the all-important 100 W output level by early 2012. IMEC’s president Luc Van den hove says that its development of an alternative approach will “bring significant contributions to bringing EUV to mass manufacturing for the 16 nm node by 2013”.