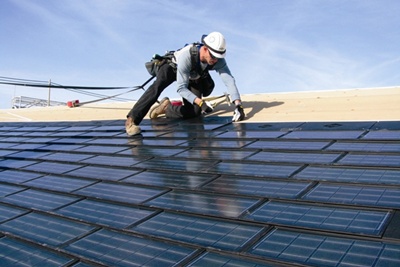 Three Chinese companies with major financial backing have formed a new investment consortium that is aiming to make a big impact on the European photovoltaics market.

China Technology Development Group (CTDC), TBEA SunOasis and Goldpoly New Energy Holdings, which are all publicly listed, revealed their move at the InterSolar Europe event held in Munich from June 11-15. They aim to participate at all levels of the supply chain, from raw materials to PV modules, and will focus on driving down the cost of building large PV installations by 5% annually, in a push to make the technology more competitive with conventional electricity sources.

The consortium is backed by China Development Bank and the China Merchants Bank, with TBEA SunOasis CEO Jianxin Zhang pointing out the potential scale of any investments: “Our PV consortium has strong financial support,” he said. “Given their backing of $10 billion credit facilities, we will be able to grow steadily over our investment and construction of solar plants in Europe.”

As well as its main aim of speeding and lowering the cost of solar power plant construction with European partners, the consortium will also start a project company that will invest in and construct its own plants. Other activities will include a focus on domestic installations in France, the creation of a renewable energy investment fund, and further PV installations in China, where although the majority of the world’s solar cells are produced, there is only a tiny PV market currently.

Germany delays PV subsidy decrease
The consortium highlighted the German government’s recent U-turn on nuclear energy and plans to scale up renewable sources as a partial replacement by 2022 as one reason why it expects continued rapid expansion of installations in Europe. Italy’s even more recent referendum on the topic also saw plans to re-introduce nuclear power rejected, which will likely further stimulate what has become the world’s second-largest PV market after Germany.

Meanwhile, Germany’s Federal Network Agency said on June 16 that planned decreases in PV subsidies would not come into force on July 1, after only 1000 MW of PV installations were registered in the first five months of the year. During the same period of 2010, the figure was 1700 MW, and the German government had previously said that it would reduce the subsidy on the assumption that more than 1750 MW would be installed in the first half of 2011.

According to official figures, Germany now has PV systems with a peak capacity of more than 18,000 GW installed around the country, equivalent to around 1% of its total electricity supply.

Although the new Chinese consortium has not yet revealed any details of planned investments, the banks behind its $10 billion credit facility are already extremely active in the PV sector. Bloomberg’s New Energy Finance analyst division reports that the China Development Bank has loaned a total of $26 million to companies including Suntech Power – the world’s largest solar cell producer – and fellow top-ten manufacturers JA Solar, Trina Solar and Yingli Green Energy.

Price falls will lead to consolidation
Bloomberg New Energy Finance (BNEF) also says that there have been fresh falls in the price of solar wafers and modules in the past month, following a major build-up of inventory caused by subsidy changes and uncertainty in the major markets of Germany and Italy.

A 23% monthly drop in multicrystalline silicon wafer pricing has translated to a 15% fall in the cost of silicon cells, which now sits at $0.92 per Watt, according to figures from the Bloomberg solar analyst Martin Simonek. Module prices are also down, although only by 6.5%, and now cost $1.68 per Watt for crystalline silicon on average - although prices in China are as low as $1.49 per Watt.

"Currently the markets are oversupplied with modules, as manufacturers seek to reduce their inventories in markets that are demanding cheap modules because of reductions in subsidies," Simonek said. "Producers are preparing for a painful consolidation that could see several players exit the solar industry."

Michael Liebreich, the chief executive of Bloomberg New Energy Finance, commented: "These prices mean that in a sunny region, solar power can be generated for 18 US cents per kWh from large projects and 20 US cents per kWh from retail rooftops. Compare that to daytime electricity prices in some markets equivalent to 20-25 US cents, and you can see things are about to get really interesting."