The start-up sets a world record for solar cell efficiency, but is waiting on a loan guarantee to scale up production to a commercial level. 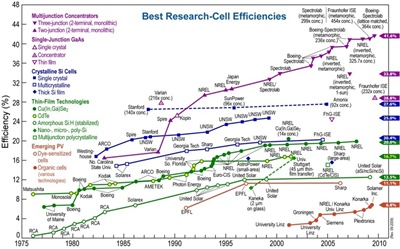 Confirmed by the US National Renewable Energy Laboratory, the figure represents a significant improvement on the previous record of 42.3%, set by Spire Semiconductor last year. Just two months ago, Solar Junction announced that it had reached 41.4%. In terms of production cells available commercially, market leader Spectrolab is currently mass-producing cells with an average efficiency of 39.2%.

Solar Junction also points out that the efficiency of its 5.5 mm x 5.5 mm cell peaked at a concentration of around 400 suns, and remained close to 43% at up to 1000 suns. Although different CPV companies are working on different concentration ratios, most use either x500 or x1000 concentration, with a trend towards the latter.

In CPV systems, any improvement to cell efficiency is regarded as particularly significant for cutting the cost of solar electricity production. This is because it can reduce the so-called “balance of system” requirements of a project, which can constitute 80% of total CPV system costs.

Developers of multi-junction cells are notorious for highlighting their “champion cell” results, rather than what will actually be manufacturable in volume, but Solar Junction insists that its development is “commercial ready” and suited to a production environment. Jeff Allen, the firm's director of business development, told optics.org that the company has been producing cells with an average efficiency of 40% for the past six months, with further improvements to that figure ongoing.

Production scale-up plans
The company is aiming to scale up production this year. Its San Jose headquarters currently has a demonstration facility with an annual capacity of 7 MW, and the plan is to expand that to 250 MW (at the existing site) and begin shipping commercial cells before the end of 2011. To support that development, Solar Junction has applied for assistance via the US Department of Energy’s loan guarantee program – recently spared in the round of federal spending cuts agreed for fiscal year 2011 – and was placed on a short-list of candidates selected for due diligence in February.

Allen, who is heading up the firm's work on the loan guarantee program, said that, if successful, Solar Junction's application for support would be entirely covered by the FY2011 budget agreement. "We aim to have a shovel in the ground in September," he said of the proposed capacity expansion, which largely relates to acquiring semiconductor capital equipment for epitaxy, lithography and other key processes.

According to DOE documentation signed last month, the loan guarantee would help to finance the capital expenditure required for a 100 MW facility - however that lower figure relates to the capacity potential with cells operating at x500 concentration, rather than x1000.

Whether 250 MW or 100 MW is the target, that level of capacity is far larger than the current annual demand from CPV systems companies – although rapid growth is now predicted for the sector, with key players Soitec, Amonix and SolFocus all working on large projects. Consulting firm Strategy Analytics recently estimated the CPV market at around 16 MW in 2010, rising to perhaps as much as 1 GW by the middle of the decade.

That forecast compares with a forthcoming report from GreenTech Media Research on the same topic that predicts a CPV market of 750 MW by 2015 – which would likely represent about 2.5% of the global PV market by that time. Those two forecasts are both regarded as aggressive, and will be dependent on continued DOE support for major projects such as the 150 MW utility-scale CPV plant recently announced by Soitec’s Concentrix subsidiary.

Proprietary technology
Where Solar Junction is different to its rival cell developers is in the nature of the semiconductor materials and epitaxial design it employs. The company says that its proprietary approach, known as adjustable spectrum lattice-matched (A-SLAM) technology, enables more effective partitioning of the solar spectrum. 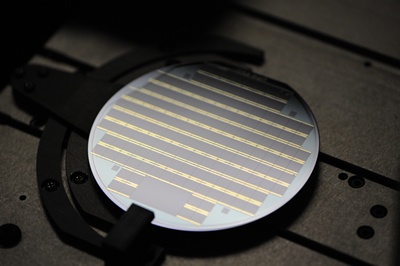 That technology is derived from work by the company’s founders at Stanford University, and is based around so-called dilute-nitride semiconductor layers. Solar Junction deposits layers of GaInNAs material in its semiconductor stack to produce a 1 eV absorber, meaning that more of the solar spectrum can be captured.

That approach has been tried previously - although a number of high-profile development projects working on the approach failed to produce the expected gains. Exactly how Solar junction has been able to succeed where others failed remains a closely guarded secret, but likely relates to the precise nature of the materials "recipe" used to deposit the semiconductor structures - although the company will not even reveal whether it employs MOCVD or MBE deposition technology.

Solar Junction also uses gallium arsenide wafers – which are much more widely available than the germanium wafers that are used by most of the other multi-junction cell makers.

To date, Solar Junction has attracted $33 million in venture finance, as well as $3 million through the DOE’s PV Incubator program.

Commenting on the recent 43.5% efficiency achievement, CEO Jim Weldon said: “There’s no question that we’ve been on a nine-month tear. We’ve delivered on milestone after milestone and attribute this to our superior performing technology platform.”

Weldon described the company’s “A-SLAM” technology as highly extensible, and an approach that showed a clear and continued path to higher efficiencies in both the short and long term. “That bodes well for CPV,” he concluded. Allen also told optics.org that the A-SLAM approach has the potential to deliver a further 2% improvement in triple-junction conversion efficiency, and also provides a roadmap to four- and five-junction cells that could deliver upwards of 50% efficiency.