A team at Laser Zentrum Hannover in Germany has perfected a way to manufacture strain gauges on free-form three-dimensional surfaces. 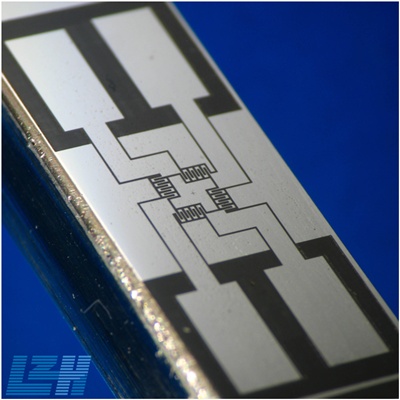 Fabricated using commercial picosecond laser technology, the sensors look set to find applications ranging from monitoring the stresses on tooling machines, to performing complex measuring tasks in the automotive industry, and even keeping an eye on how medical implants such as prosthetics are performing.

“Our TFSGs can be used for exact and real-time measurement of strain in machines, bearings or motors at the place where the highest strain occurs,” Ulrich Klug, head of the Microtechnology group in LZH’s Production and System Technology department, told optics.org. “These environments call for highly robust sensors which can withstand high temperature fluctuations as well as mechanical and chemical stresses.”

The conventional way of sensing mechanical stress in workpieces and components is to use an adhesive strain gauge based on thin polymer foils. But as Klug explains, when harsh environments are involved, there is a key problem.

Sticky situation
“The adhesive between the substrate and the sensing layers is very sensitive to temperature changes and humidity,” he said. “You get good signals when you have stable and controlled atmospheric conditions, but when you bring these sensors into harsher environments where, for example, there are large differences in temperature, the lifetime and performance of conventional polymer-based technology is limited.”

The answer was simple: remove the problematic adhesive and fabricate a sensor directly onto the workpiece itself. Klug admits this is not a new idea, as tried-and-tested methods such as photolithography routinely use the same approach to manufacture TSFGs, albeit using a mask to create the required structures.

“We do not want to compete with photolithography as it is a very cost-effective method of mass manufacturing,” he commented. “On the other hand, photolithography is limited to two-dimensional workpieces and therefore restricts the range of applications for TSFGs significantly.”

“Our laser-based process explores the third dimension and enables a lot of new applications. It has a lot of flexibility and is ideal for small- to medium-sized batches of specialist devices, with the prospect of mass production in the future.”

Fabrication process
Klug and his team start by preparing the surface of the workpiece, a process that involves depositing an insulating layer like alumina or silicon oxide. This is followed by the sensing layer, which is made from a substance such as a nickel-chromium alloy. Finally, in order to add the sensing layer function, it is structured using a laser.

“People have previously used nanosecond lasers to pattern metal thin films,” said Klug. “But it is difficult to achieve selective ablation of the sensing layer without damaging or destroying the layers underneath, or even the substrate itself. Our trick is to use a picosecond laser, which is better suited to high-precision ablation and allowed us to develop a process to achieve selective and damage-free removal of the sensing layer.”

The group uses a commercial picosecond system emitting 12 ps pulses at 532 nm and a repetition rate of 10-500 kHz. This works in tandem with a high-speed scanner to create 5-20 µm-wide channels on the sensor in just a few seconds.

As well as using the picosecond laser to pattern free-form and complex circuits, an additional advantage is the ability to use the same laser to trim the circuit. “We can structure three-dimensional parts, on a curve or a bearing or medical implant,” said Klug. “We think that our laser process has no limitations when it comes to creating sensor structures and trimming circuits. Our TFSGs are appropriate for any situation where the mechanical stress needs to be precisely measured in harsh conditions on complex workpieces.”

Gentelligence
The work of Klug and his team falls under a broader project known as "Gentelligent Components in their Lifecycle", which is financed by the German Research Foundation. The main goal of this collaborative effort is to develop a network of sensors which, similar to the TFSGs, are fabricated directly on to the surface of interest.

“This is a visionary project,” said Klug. “We have many ideas and there are a number of sub-projects addressing the goal of bringing intelligence and sensing - and maybe even genetics - into components. Our work is just one part of this.”