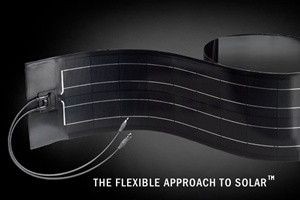 The US Department of Energy (DOE) has agreed a $197 million loan guarantee with thin-film solar module maker SoloPower, to support the company’s build-out of a manufacturing facility in Wilsonville, Oregon.

SoloPower outlined its plans for the site, which will retrofit an existing building with equipment to produce flexible copper indium gallium diselenide (CIGS) modules using a low-cost, roll-to-roll process, just last month. The company plans to run the fab with an initial 75 MW annual capacity, before extending that to 400 MW in the longer term.

The conditional commitment from the DOE is the second to be awarded to a developer of advanced CIGS photovoltaic modules, after Solyndra received $535 million backing in July 2009. Other beneficiaries of the guarantee program include CdTe panel maker Abound Solar, which received a $400 million guarantee commitment late last year, while the proposed 290 MW Agua Caliente solar project in Arizona, which will use panels made by First Solar, was backed with a $967 million guarantee in January 2011.

Although they do not turn sunlight into electrical energy as efficiently as rigid crystalline silicon PV cells, flexible CIGS modules such as SoloPower’s should be much easier to install and cheaper to make, meaning that their overall cost-effectiveness will provide a better return in many applications.

Energy Secretary Steven Chu said of the SoloPower deal, which is funded via the 2008 Recovery Act: “Investments like these are going to help America become a world leader again in clean energy manufacturing.”

SoloPower’s CEO Tim Harris added: “This backing allows us to rapidly ramp up our production and to promote the spread of clean, distributed solar power to rooftops and on the ground, while providing hundreds of quality manufacturing jobs using some of the most advanced technology in the world.”

Loans for clean energy
Overall, the DOE’s loan guarantee program is supporting 19 clean energy projects worth nearly $18 billion in the US. Other technologies supported include wind, geothermal and nuclear energy production, although fully one-third of the $18 billion total is supporting the Ford Motor Company’s introduction of technology to build higher-efficiency versions of existing cars.

In the DOE’s budget proposal for 2012, released on February 14, central support for photovoltaic technology development was earmarked for an increase to $457 million (from $243 million last year), although that proposal, along with the rest of the budget, will be subject to some lively debate and negotiation while it passes through the legislative process in the US over the next few months.

The SPIE international society for optics and photonics welcomed the Obama administration’s proposed budget for 2012, highlighting its commitment to research funding through the DOE’s Advanced Research Projects Agency-Energy (ARPA-E) program, as well as the Energy Innovation Hubs that are designed to increase interaction between industry and academia.

The Obama proposals came as the Republican-controlled House of Representatives released its aim to cut $100 billion of spending compared with 2011 level, including a significant budget cut for the DOE’s Office of Science.

With the White House and Congress likely to be at loggerheads over much of the content of the budget, passing the legislation looks likely to be a torturous and drawn-out process.