Fresh from a major refinancing, the diversified photonics firm will close five production facilities and seven other sites over the next year. 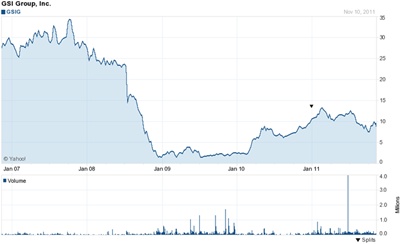 The GSI group of companies, which includes JK Lasers, Cambridge Technology and Synrad among its many well-known photonics brands, is to close twelve facilites – including five production sites and other sales and research locations – before the end of next year, as management aims to streamline the wider business.

The move, dubbed “12x12” is expected to save the company around $5 million per year, while the group has also decided to exit its Control Laser and Baublys businesses, which have been under “strategic review” since the summer.

In the third quarter, it was the laser products segment that showed the strongest annual growth, with sales leaping 18% year-on-year to $34.2 million. Overall, the group posted sales of $93.3 million, up slightly year-on-year but down from $101.4 million in Q2 2011 amid a weak semiconductor market and reflecting caution from customers putting off investments in laser equipment as fears over the wider economy grew.

GSI’s precision motion and technologies sector remains the largest of the group's three reporting divisions, delivering $48.9 million in sales at a healthy gross margin of 47.5%. And while that figure reflects a decline of 3% compared with last year, CFO Robert Buckley highlighted growth at the group’s Cambridge Technology subsidiary as a strong positive. GSI’s semiconductor systems division posted the remaining $10.1 million in quarterly revenues.

Kilowatt fiber laser launch
GSI’s JK Lasers subsidiary is the latest company to launch a kilowatt-scale fiber laser system, having recently shipped its first such product to a customer in China. Up until now, it has only offered fiber laser systems with an output power of up to 500 W.

Roush told investors that although JK has a long-term plan to develop multi-kilowatt fiber lasers, that would be unlikely to happen within the next year, and he doesn’t anticipate taking on the market leader IPG Photonics head-to-head. Instead, JK will be looking to develop intellectual property and its supply chain in this area while targeting its existing solid-state laser customers with the new fiber laser systems.

Benefits of the JK1000FL fiber laser system, which will be promoted at the EXPOLaser show in Piacenza, Italy, next week, are said to include a time-sharing capability designed to eliminate system load and unload times, as well as an energy-sharing feature that allows simultaneous welding of multiple locations on a single part, for example welding lids onto canisters and gears onto shafts.

While GSI’s under-review semiconductor systems division will feel the greatest impact of the microelectronics downturn – expected by Roush to last for the next six months – the weaker spending environment will also hit other parts of the wider business. As a result, GSI has adjusted its full-year guidance downwards.

It now expects to post sales of between $365 million and $370 million, down from the previous estimate of $375 million-$385 million. That means that final-quarter revenues should come in at somewhere between $88 million and $98 million.

Streamlined
Having last month completed an $80 million refinancing effort relating to its earlier bankruptcy reorganization, the “streamlined” GSI will also benefit from much lower repayments on interest in 2012. That alone should save GSI some $7 million each year, and when added to the “12x12” restructuring Roush and Buckley are confident that next year will show a 10% performance in underlying profitability (EBITDA).

“Though we do expect to see some continued softness in the microelectronics market in the early part of the year, we expect 2012 to be a year of continued revenue growth and expanding profitability for GSI,” said Roush.

And although that revenue growth is expected to be modest – the CEO suggested “mid-single-digit” growth on continuing operations – the company’s re-emergence from the bankruptcy proceedings of little more than a year ago now look to be on a solid footing.

Prior to the recent $80 million refinancing to replace payment-in-kind (PIK) election notes with a more conventional debt, GSI had paid off a $35 million chunk of the original PIK obligation, bringing its net debt (total debt minus cash and equivalents) to $22.5 million - less than half of the level that it began 2011 with.

“We now have a much clearer vision for the company’s growth, and a roadmap for streamlining our operating structure,” Roush concluded. “We have clear priorities, and in 2012 we will take major steps to implement those priorities and to realize our vision.”