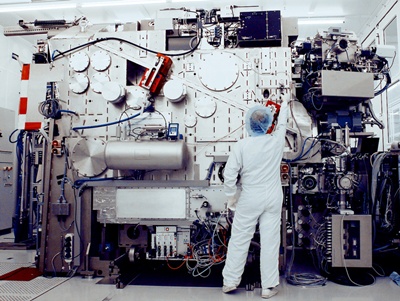 ASML, the world’s leading lithography systems provider for volume semiconductor applications, ended up shipping three times as many new tools in 2010 than it did in the depressed market of 2009.

That’s according to the company’s latest financial report, which saw the company post full-year sales of € 4.5 billion in fiscal 2010 – up from only € 1.6 billion in the prior year.

The sales figure, along with those for profit and forward bookings, represented a record for the Netherlands-based company, confirming the recovery from the doldrums of 2009. “The fourth quarter was a strong close to a remarkable year in the history of ASML,” reported upbeat CEO Eric Meurice. In all, ASML sold 197 systems in 2010, compared with only 70 in 2009.

The closing quarter of the year itself saw a sharp sequential increase in shipments, with 56 new lithography tools sold – compared with 40 new tools in the third quarter. And according to Meurice, that positive trend is set to continue after strong bookings, driven by manufacturers of chips for NAND Flash memory applications, resulting in an even stronger revenue performance in 2011.

“We booked more than € 2 billion worth of orders in the fourth quarter of 2010, leading to a record year-end backlog of € 3.9 billion of systems shippable in 2011,” said Meurice. “This record-breaking backlog and the additional expected Q1 bookings confirm a potential for more than € 5 billion of net sales in 2011.”

Good news for suppliers
That solid outlook will be welcome news for key suppliers of optical components used in lithography systems, in particular the excimer laser vendor Cymer and firms such as Zygo Corporation, which acquired ASML’s precision optics division in late 2010, as well as Jenoptik, Carl Zeiss and others.

ASML also reported further progress in the development of extreme ultraviolet (EUV) systems, a technology regarded by many as the long-term successor to excimer laser light sources for semiconductor lithography - albeit one that has endured a problematic development period beset by delays. Meurice noted that ASML has now received nine orders for its third-generation EUV platform, the NXE:3300, but he remains cautious about exactly when those systems will begin to ship in significant numbers:

“It is certainly too early to commit numbers for 2012, as the industry still needs a number of months to confirm EUV plans, performance and roadmaps, but it is encouraging to envision this other engine of growth for 2012 and beyond,” said the CEO.

He added that, in the latest quarter, ASML had shipped the first of its second-generation EUV systems, called the NXE:3100, and had run a successful trial exposing wafers to the cutting-edge light source at a customer’s manufacturing site.

“In coming months, five more customers will receive their NXE:3100 systems, as EUV is now confirmed as the most likely lithography platform to continue Moore’s law towards smaller, cheaper and more energy-efficient semiconductors,” Meurice added. In the company’s investor presentation, the company said that EUV would likely continue the rule of Moore’s law to beyond 2020.

But for now ASML’s system sales remain dominated by immersion tools based on ArF excimer sources, which accounted for some 70% of sales in the closing quarter of 2010. KrF-based tools accounted for only 19% of sales, although that proportion is likely to increase slightly over the coming year thanks to increased bookings.