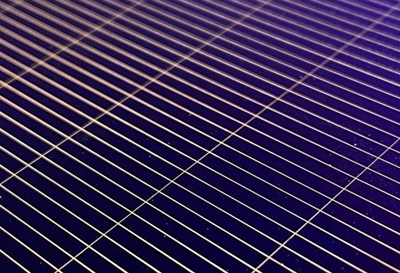 Thin copper contacts mean the silicon layer does not experience much shading.

The rising price and low availability of raw materials such as silver are leading to higher costs in producing photovoltaic modules. Now researchers at the Fraunhofer ISE have developed a novel electroplating process that involves substituting costly silver with cheaper copper, which is more readily available.

The researchers have also succeeded in replacing the polymers that are usually left over after electroplating processes, and are expensive to dispose of, by instead using easily recyclable aluminum for masking. In order to bring the technology to the market more quickly, a spin-off company called PV2+ has been launched.

When it comes to generating electricity from renewable energies, photovoltaics are a mainstay. Modern heterojunction solar cells have a particularly low CO2 footprint on account of the low amounts of silicon used to produce them, and when it comes to industrial production, they achieve the highest levels of efficiency. As a result, the chances are high that this technology will become the standard in production.

According to the International Renewable Energy Agency (IRENA), more than 96 TWh of energy was produced by photovoltaic systems worldwide in 2012, which rose to nearly 831 TWh by 2020. According to the German Environment Agency, the amount of electricity generated from photovoltaics in Germany rose from almost 27 TWh to almost 50 TWh in the same period.

This is by no means the limit of what photovoltaics can offer. However, when manufacturing solar cells, valuable silver is used for busbars and contacts, which conduct the electricity that is generated in the silicon layer by means of solar radiation.

The cost of this precious metal is rising — even today, silver accounts for around 10 percent of the manufacturing price of a photovoltaic module. Moreover, there are only limited quantities of the metal available on Earth. The solar industry processes 15 percent of the silver mined, but due to the industry’s high growth rate, this proportion is set to rise sharply. 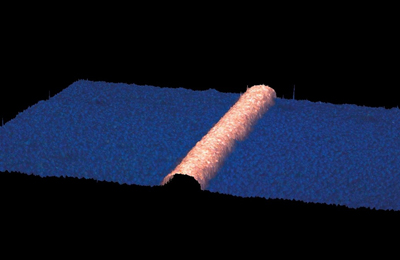 Researchers at the Fraunhofer Institute for Solar Energy Systems ISE have taken on this challenge. With about 1,400 employees, this Freiburg-based institute is the largest solar research institute in Europe.

A team of researchers led by Dr. Markus Glatthaar, an expert in metallization and structuring, has developed an electroplating process for the promising heterojunction technology to replace silver with copper. Copper is many times cheaper and more readily available than silver.

To ensure that the electrically conductive surface of the solar cell is not completely electroplated with copper, the areas of the surface that should not be coated must first be masked. These areas are covered by a coating that has an electrically insulating effect, thereby preventing them from being electroplated. The copper layer will only build up in the areas not coated with the insulation. The researchers have made another significant advance here: Until now, expensive polymer-based lacquers or laminated foils have been used in this industry to mask the silicon wafer in the electrolyte bath.

Properly disposing of the polymers is an expensive process that generates a lot of waste. Dr. Glatthaar and his team have been able to substitute the polymers with aluminum. Just like copper, aluminum is fully recyclable. Switching the materials twice, from silver to copper and from polymer to aluminum, also brings twice the benefit: Producing solar cells is not only more sustainable, but also significantly cheaper.

A scientific breakthrough: innovative electroplating and improved electrolytes But how did the researchers manage to replace silver, an expensive precious metal? “We developed a special electroplating process that makes it possible to use copper instead of silver for the busbars,” commented Dr. Glatthaar.

This even improves conductivity — the copper contact lines are particularly narrow on account of their laser structuring. Due to the copper line’s’ extremely small width of only 19 μm, the light-absorbing silicon layer experiences less shading than with the silver lines. This and the high conductivity of electroplated copper improve the electricity yield.

The Fraunhofer team has also made a second technological achievement in using aluminum as a masking layer. The difficulty here is the electrically conductive nature of aluminum, which renders it at first glance unsuitable to use as a mask. The Fraunhofer researchers took advantage of the fact that aluminum can form an insulating oxide layer on its surface.

In order to bring the promising technology to the market more quickly, Fraunhofer ISE launched the spin-off PV2+. The letters “P” and “V” stand for photovoltaics, with “2+” indicating the double positive charge of copper ions in the electroplating bath. The company is also based in Freiburg, with Fraunhofer researcher Dr. Glatthaar acting as CEO. He is aiming to set up a pilot production plant together with industrial partners as early as the start of 2023.

As Prof. Andreas Bett, institute director of Fraunhofer ISE, explains: “These innovative solar cells are an important stepping stone on the way to a future power supply based on renewable energies. They will give the photovoltaics industry a much-needed boost.

The spin-off has huge potential to quickly and successfully establish itself on the market. And of course, we are particularly pleased that these technologies were developed at our institute.” What’s more, the German Federal Ministry for Economic Affairs and Climate Action (BMWK) is funding the project as part of its start-up program Exist.