Heterodyne spectrometer based around quantum cascade source could distinguish between water and hydroxyl compounds. 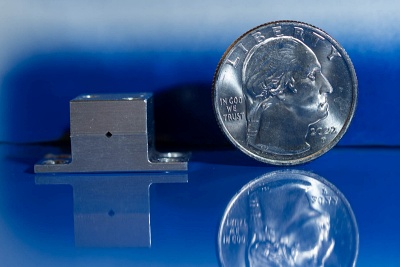 NASA says that an optical system based around a quantum cascade laser (QCL) emitting in the terahertz spectrum could make it easier to locate water on the Moon.

According to the space agency, engineer Berhanu Bulcha from the Goddard Space Flight Center is leading an effort to develop a heterodyne spectrometer that will be capable of distinguishing between water, hydrogen ions, and hydroxyl-containing chemical compounds - something that most existing technologies are unable to do.

Terahertz QCLs
Locating water and other resources is a key priority for NASA, as it would be crucial to exploring both the Moon and more distant objects within the solar system. Water would be among the most important targets, both for survival and as a potential source of fuel.

Bulcha believes that a heterodyne spectrometer based around a stable, high-powered, terahertz laser would be able to definitively identify and locate sources of water on the Moon.

And just that kind of laser has now been prototyped, in collaboration with the California company Longwave Photonics. Using technology licensed from co-founder Qing Hu’s group at the Massachusetts Institute of Technology’s Research Laboratory of Electronics, the Mountain View firm has won a series of Small Business Innovation Research (SBIR) program grants from NASA over the past decade.

CubeSat compatibility
Bulcha and his team have now integrated the firm’s terahertz QCL on a waveguide with a thin optical antenna to narrow the angle over which the beam is emitted. NASA says that the integrated laser and waveguide unit reduces this dissipation by half, inside a package smaller than a quarter-dollar coin.

“This laser allows us to open a new window to study this frequency spectrum,” Bulcha said in a NASA release.

“Other missions found hydration on the Moon, but that could indicate hydroxyl or water. If it’s water, where did it come from? Is it indigenous to the formation of the Moon, or did it arrive later by comet impacts? How much water is there? We need to answer these questions because water is critical for survival and can be used to make fuel for further exploration.”

He is now aiming to make a flight-ready laser for NASA’s Artemis program, while the tiny size and low power consumption of the QCL means the spectrometer system would fit in a shoebox-sized “1U” CubeSat, and could even feature in a handheld device for use by future explorers on the Moon, or perhaps elsewhere in the solar system.

Longwave, which was set up by MIT’s Hu and Alan Lee back in 2010, is now selling ultra-broadband QCLs emitting from 1.6-4.3 THz, aimed at applications in broadband spectroscopy and hyperspectral imaging.