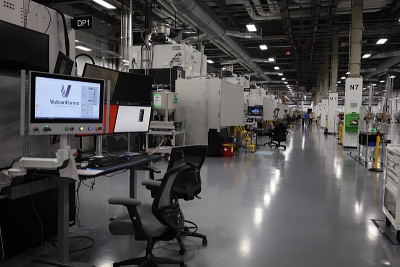 VulcanForms, a startup company that originated in the Massachusetts Institute of Technology (MIT) mechanical engineering department, says it has raised $355 million in venture capital with which to scale additive manufacturing using high-power lasers.

The Burlington-headquartered firm, co-founded in 2015 by MIT researchers Martin Feldmann and Professor John Hart, is located close to fiber laser specialist IPG Photonics, which is based in Oxford.

Feldmann and Hart have based their proprietary approach to digital manufacturing around 100 kW lasers - of which IPG Photonics is one of the few known providers.

2 MW laser capacity
The firm has set up what’s claimed to be the world’s highest throughput laser metal additive foundry - called “VulcanOne” - in Devens, Massachusetts, and says that a “fleet” of 100 kW systems there will together total more than 2 MW of laser capacity to make metal parts.

“VulcanForms brings forth metal additive manufacturing as a scalable industrial process, and as a cornerstone of breakthrough digital production systems,” said Hart in a release announcing the funding round.

“Integrated digital production facilities are critical infrastructure which will accelerate domestic and global innovation and draw top talent to the manufacturing sector.”

Company CEO Feldmann added: “By scaling advanced digital manufacturing, we can create a new era of US innovation and economic growth.

“We’ve recognized a game-changing opportunity when additive manufacturing technology is scaled for industrial production and is seamlessly integrated with automated machining and robotics.”

Feldmann points out that the company - now employing 300 people - has attracted personnel from the likes of Google, Pratt & Whitney, and IPG. Its customer base already includes the US Department of Defense, specifically for parts used in the F35 Joint Strike Fighter and Patriot Air Defense System platforms.

Manufacturing jobs
VulcanForms says it has also delivered thousands of components for the semiconductor industry, and is helping to push innovation in medical implants.

“By combining its breakthrough technology, a data- and simulation-based digital thread, and operational excellence, VulcanForms’ integrated approach allows its customers to innovate faster and produce more without the need to make major capital investments and implement new manufacturing technologies from scratch,” claims the firm.

The VulcanOne foundry is said to represent a capital investment of $100 million, with more than 100 people now employed at the site.

VulcanForms has another facility in Newburyport that is focused on automated precision machining and assembly, and says that its joined-up approach to manufacturing will help reverse the flow of off-shoring that has seen millions of US manufacturing jobs lost over the past few decades.

Greg Reichow, a partner at Eclipse Ventures and also a director at VulcanForms, observed: “There is a fundamental shift in the ways manufacturers need to adapt to global supply chain challenges and the increasing demands for product design flexibility.

“VulcanForms’ full-stack approach to deliver an engineered solution, combining advanced additive and subtractive technologies merged through a digital thread will revitalize US manufacturing and hardware innovation.

“The technologies that enable this agile workflow will dramatically impact the way products are imagined, designed, built, and delivered for decades to come.”