Better monitoring of plant phenotypes and what happens underground will assist cultivation. 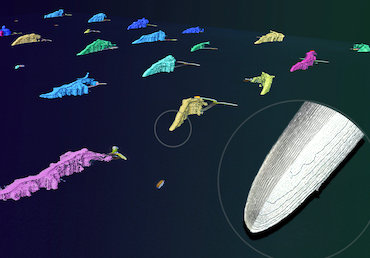 The MutipleXLab platform is modular, mobile and intended to continuously monitor thousands of seeds from germination to root development at low cost. Existing plaforms are more costly and stationary, according to the project.

"Our system combines high-throughput phenotyping with high resolution, a common bottleneck in plant phenomics," said KAUST's Vinicius Lube. "It has exceptional resolving power at both large field-of-view and high resolution when compared to other optical systems."

Increasing global food demand is putting new emphasis on efficient cultivation and on the breeding of better crops. Isolating plants with desirable phenotypes is a significant part of these efforts, but doing so non-destructively and in varied resource environments is challenging.

Optical technologies can already play a part in meeting these demands, although to date the instruments have not been necessarily as economic or versatile as desired. Multispectral imaging has been employed to image and compute above-ground features, while Lidar can analyze crops in their fields, but these approaches carry a significant price tag.

"We sought to automate image acquisition and facilitate stacking to increase the system potential," noted the project in its published paper. "We micropositioned the camera system with the aid of stepper motors capable of reaching a maximum resolution of 1 micron per step, which facilitates refocusing and acquiring z-stacks to mitigate the downsides of a shallow depth-of-field (DOF) in extreme macrophotography."

The shallow DOF images can be automatically stacked and systematically masked using computer software and post-processing workflows, producing an overall sharper image with an extended DOF. Computer vision and pattern recognition technologies combined with machine learning were then used to analyze and quantify root growth dynamics.

In trials comparing MultipleXLab with a standard stereomicroscope for study of Arabidopsis seeds, the KAUST platform was able to achieve better image quality through its improved LED lighting, while superior dynamic range produced images with less noise, chromatic aberration and interfering reflections, according to the project.

"The image segmentation models we developed are essential to allow the system to fully operate at high-throughput with minimal human supervision," said Vinicius Lube. "The system's ability to image and quantify the growth rate of several samples simultaneously allowed us to extract new phenotypes. For example, we could identify faster and slower growth for different plant mutants."

KAUST now plan to commercialize MutipleXLab as a tool for plant biologists, the seed industry, crop scientists and breeding companies.