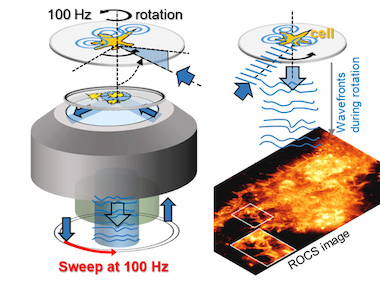 Getting the blues: images from scattered laser light

Imaging the structures of living cells is made more complicated by a basic principle of nature: that the smaller the structures are, the faster they tend to be moving.

Increasing the signal intensity of a microscopy technique to tackle this can be problematic, since too high a photon flux can damage the target, and the signals of moving structures can disappear into the background noise.

A project at the University of Freiburg has now developed a microscopy technique able to successfully analyze cellular activity on different timescales, by enhancing an existing method termed rotating coherent scattering spectroscopy (ROCS).

Developed at Freiburg as a label-free imaging technique that could overcome the optical diffraction limit, ROCS adds up the scattered light from a sample obliquely illuminated from several different angles, an arrangement ideally ensuring that any two adjacent scatterers are always in line with at least two illumination directions.

This approach and its incoherent averaging of multiple coherent images illuminated from different directions can provide not only a strong separation contrast, but also a nearly artifact free image, resolving image structures "that remain unresolved by conventional incoherent fluorescence microscopy," noted the project team when ROCS was developed.

"We are now able to record ROCS signals and fluorescence signals at the same time, combining the specificity of fluorescence imaging with the millisecond dynamics of label-free ROCS imaging," said the team in its paper. "Although structure-specific light emission is currently not possible with ROCS microscopy, we extract relevant biological information even without specificity that cannot be obtained by any other imaging technology."

The Freiburg platform rotates the oblique laser beam a hundred times per second around the object, and thereby produces 100 images per second. In ten minutes of observation "we already have 60,000 images of living cells, which turn out to be far more dynamic than previously thought," commented Freiburg's Alexander Rohrbach.

The project believes that 100-Hz ROCS microscopy reveals various unexpected findings in the high-speed world of molecular cell structures, which in some cases would have previously required even faster measurements. The technique should also allow molecular absorption and specificity to be combined with optical sectioning and 3D imaging.

"In combination with the specificity provided by fluorescence techniques, ROCS represents a profitable imaging approach which can be well added to existing microscopes," commented the team in its paper. "We envision a bright and promising future for ROCS microscopy, not only for cell biology."