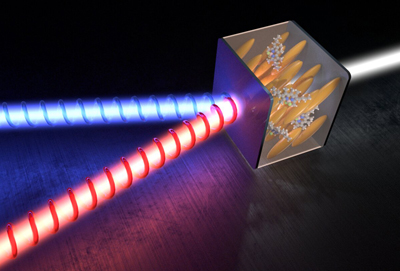 Scientists from the University of Warsaw, the Military University of Technology, Poland, and the University of Southampton, UK, have developed a new type of tunable microlaser emitting two beams. “The beams are polarized circularly and directed at different angles,” explained Prof. Jacek Szczytko from Warsaw.

This result was obtained by creating a “persistent-spin helix” on the surface of the microcavity. The achievement is described in Physical Review Applied.

The scientists filled the optical microcavity with a liquid crystal doped with an organic laser dye. The microcavity consists of two perfect mirrors placed close to each other – at a separationof 2-3 µm – so that a standing electromagnetic wave is formed inside. The space between the mirrors was filled with a liquid crystal medium, which was further organized using a special mirror coating.

“The characteristic feature of liquid crystals are their elongated molecules, which are combed on the surface of the mirrors so they stand up under the influence of an external electric field, which also turns other molecules filling the cavity,” said first author, Marcin Muszynski, also from Warsaw.

The precise arrangement of molecules inside the laser microcavity, identified at the Military University of Technology, generated two linearly polarized light modes in the cavity i.e. two standing waves of light with opposite linear polarizations.

The lasing was achieved for this tunable mode: the laser emitted one linearly polarized beam perpendicular to the surface of the mirrors. The use of liquid crystals allowed for a smooth tuning of the light wavelength with the electric field by as much as 40 nm.

“However, when we rotated the liquid crystal molecules so that both modes – the one sensitive to the orientation of the molecules and the one that did not change its energy – overlapped, the light emitted from the cavity suddenly changed its polarization from linear to two circular, right- and left-handed, with both circular polarities propagating in different directions, at an angle of several degrees,” explained Prof. Jacek Szczytko, from the University of Warsaw.

Muszynski added, “The phase coherence of the laser has been confirmed in an interesting way. The persistent-spin helix pattern of stripes, with different polarization of light, spaced 3 µm apart, appeared on the surface of the sample.

”Theoretical calculations show that such a pattern can be formed when two oppositely-polarized beams are phase coherent and both modes of light are inseparable—this phenomenon is compared to quantum entanglement,” he said.

So far, the laser operates in pulses because the organic dye that was used slowly photodegrades under the influence of intensive light. The team hopes that replacing the organic emitter with more durable polymers or inorganic materials (e.g., perovskites) will allow for longer lifetime.

Warsaw’s Prof. Barbara Pietka concluded, “The obtained precisely-tunable laser can be used in many fields of physics, chemistry, medicine and communication. We use nonlinear phenomena to create a fully optical neuromorphic network. This new photonic architecture can provide a powerful machine learning tool for solving complex classification and inference problems, and for processing large amounts of information with increasing speed and energy efficiency.”