Lund University images photosynthesis dynamics to show how gas emissions might be controlled. 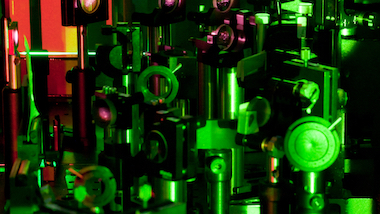 Photosynthesis is a complex process involving several light harvesting complexes and reaction centers, but understanding its fine details has been made more urgent by concerns about greenhouse gases and climate change.

A project at Lund University has now used ultrafast laser spectroscopy and an optical cavity to analyze and influence the dynamics of photosynthesis. The findings indicate how the overall process might be tuned, and routes to designing artificial photosynthetic devices.

The team built on previous research into the use of optical cavities to mediate the complex dynamics involved in photosynthesis and other light-matter interactions. With the correct mirror and optical parameters, strong coupling between photosynthetic molecules and the cavity can be achieved, creating new optically allowed polariton states not normally involved in the process. These in turn influence the overall photosynthesis operation and alter other physical properties, such as conductivity.

Although the theories behind these effects are known, practical demonstrations of them have proven challenging. The Lund project is the first to use transient absorption spectroscopy to confirm the polariton dynamics of LH2 in the purple bacteria, using a set-up in which two parallel gold mirrors created a Fabry-Pérot cavity and sandwiched a polyvinyl alcohol film containing LH2s.

"We have inserted so-called photosynthetic antenna complexes between two mirrors that are placed just a few hundred nanometers apart as an optical microcavity," commented Tönu Pullerits, professor of chemical physics at Lund University. "You can say that we catch the light that is reflected back and forth between the mirrors in a kind of captivity."

The strong coupling regime created in the experiment was verified by monitoring the dispersive behavior of the cavity, and relating that to the transition energies of the excited species in the protein. According to the project's paper, substantial changes in exciton dynamics due to the creation of polariton states in LH2 were seen.

Once strong interaction between the light and the antenna complexes is achieved a ripple effect can be created that speeds up the energy transfer process, commented the project, opening up the prospect of adjusting the different stages of the overall photosynthesis chain in order to achieve a desired end result

Novel artificial photosynthetic materials might also be possible, built to order once the intended energy dynamics were defined.

"If we can make the first steps of photosynthesis faster and more efficient, we can hopefully also make the light energy conversion of other systems more efficient." said Pullerits. "We have now taken a couple of initial steps on a long journey, and set out a very promising direction."