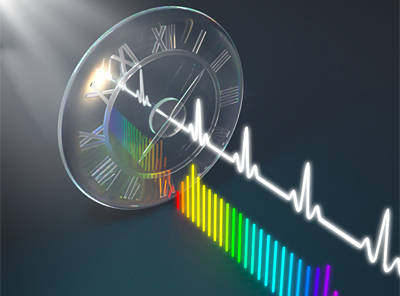 Researchers from the Harvard John A. Paulson School of Engineering and Applied Sciences (SEAS) have developed a high-performance, on-chip femtosecond pulse source using a tool that seems straight out of science fiction: a “time lens”. The research is published in Nature.

“Pulsed lasers that produce high-intensity, short pulses consisting of many colors of light have remained large,” commented Marko Lončar, the Tiantsai Lin Professor of Electrical Engineering at SEAS and senior author of the study.

“To make these sources more practical, we decided to shrink a well-known approach, used to realize conventional – and large — femtosecond sources, leveraging a state of the art integrated photonics platform that we have developed,” Lončar added.

“Importantly, our chips are made using microfabrication techniques like those used to make computer chips, which ensures not only reduced cost and size, but also improved performance and reliability of our femtosecond sources.”

Conventional lenses bend rays of light coming from different directions by altering their phase so that they hit the same location in space — the focal point. Time lenses, on the other hand, “bend” light beams in similar ways – but they alter the phase of light beams in time rather than space. In this way, different wavelengths of light, which travel at different speeds, are re-timed so that they each hit the focal plane at the same time.

The team starts by passing a continuous-wave, single-color laser beam through an amplitude modulator that controls the amount of light going through the time-lens, a function similar to an aperture in a conventional lens. The light then propagates through the “bendy” part of the lens, a phase modulator in this case, where a frequency comb of different colors is generated.

Then the final component of the laser comes in — a fishbone grating along the waveguide. The grating changes the speed of the different colors of light to bring them all in line with each other, neck and neck in the race, so that they hit the focal plane at the same time.

Because the device controls how fast different wavelengths travel and when they hit the focal plane, it effectively transforms the continuous, single color laser beam into a broadband, high-intensity pulse source that can produce ultra-fast, 520fs bursts.

The device is highly tunable, integrated onto a 4mm x 20mm chip and, because of lithium niobate’s electro-optical properties, requires significantly reduced power than table-top products.

“We’ve shown that integrated photonics offers simultaneous improvements in energy consumption and size,” said Mengjie Yu, a former postdoctoral fellow at SEAS and first author of the study. “There’s no tradeoff here; you save energy at the same time you save space. You just get better performance as the device gets smaller and more integrated. Just imagine — in the future we can carry around femtosecond pulse lasers in our pockets to sense how fresh fruit is or track our well-being in real time, or in our cars to do distance measurement.”

Yu is currently an Assistant Professor at the University of Southern California. Next, the team aims to explore some of the applications for both the laser itself and the time lens technology, including in lensing systems like telescopes as well as in ultrafast signal processing and quantum networking.

Harvard’s Office of Technology Development has protected the intellectual property arising from the Lončar Lab’s innovations in lithium niobate systems. Lončar is a cofounder of HyperLight, a startup, which was launched to commercialize integrated photonic chips based on certain innovations developed in his lab. The research was a collaboration between Harvard, HyperLight, Columbia University and Freedom Photonics. 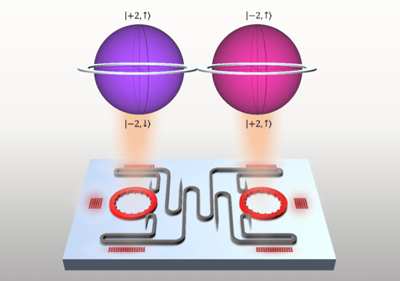 Meanwhile, scientists at Penn Engineering have created a chip that, they say, outstrips the security and robustness of existing quantum communications hardware. The technology communicates in “qudits,” doubling the quantum information space of any previous on-chip laser.

Liang Feng, Professor in the Departments of Materials Science and Engineering and Electrical Systems and Engineering, along with MSE postdoctoral fellow Zhifeng Zhang and ESE Ph.D. student Haoqi Zhao, describes the technology in a recent study published in Nature.

While non-quantum chips store, transmit and compute data using bits, state-of-the-art quantum devices use qubits. Bits can be 1s or 0s, while qubits are units of digital information capable of being both 1 and 0 at the same time. In quantum mechanics, this state of simultaneity is called “superposition.” A quantum bit in a state of superposition greater than two levels is called a qudit to signal these additional dimensions.

However, with only two levels of superposition, qubits have limited storage space and low tolerance for interference. The Feng Lab device’s four-level qudits enable significant advances in quantum cryptography, raising the maximum secrete key rate for information exchange from 1 bit per pulse to 2 bits per pulse. The device offers four levels of superposition and opens the door to further increases in dimension.

“The biggest challenge,” said Zhang, “was the complexity and non-scalability of the standard setup. We already knew how to generate these four-level systems, but it required a lab and many different optical tools to control all the parameters associated with the increase in dimension. Our goal was to achieve this on a single chip. And that’s exactly what we did.”

The hyperdimensional spin-orbit microlaser builds on the Penn Engineering team’s earlier work with vortex microlasers, which sensitively tune the orbital angular momentum of photons. The most recent device upgrades the capabilities of the previous laser by adding another level of command over photonic spin.

This additional level of control—being able to manipulate and couple OAM and spin—is the breakthrough that allowed them to achieve a four-level system. The difficulty of controlling all these parameters at once is what had been hindering qudit generation in integrated photonics and represents the major experimental accomplishment of the team’s work.

“Think of the quantum states of our photon as two planets stacked on top of each other,” said Zhao. “Before, we only had information about these planets’ latitude. With that, we could create a maximum of two levels of superposition. We didn’t have enough information to stack them into four. Now, we have longitude as well. This is the information we need to manipulate photons in a coupled way and achieve dimensional increase. We are coordinating each planet’s rotation and spin and holding the two planets in strategic relation to each other.”

Feng concluded, “There is a lot of concern that mathematical encryption, no matter how complex, will become less and less effective because we are advancing so quickly in computing technologies. Quantum communication’s reliance on physical rather than mathematical barriers make it immune to these future threats. It’s more important than ever that we continue to develop and refine quantum communication technologies.”