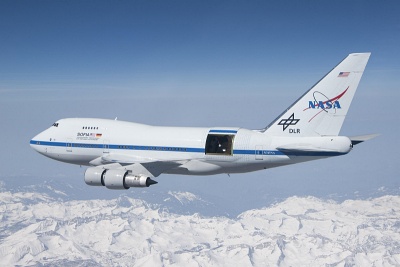 SOFIA flying above the Sierra Nevada

The Stratospheric Observatory for Infrared Astronomy (SOFIA) has helped astronomers discover what is believed to be a new kind of exploding star, something distinctly different to regular nova and supernova outbursts.

According to researchers who are set to publish their analysis in The Astrophysical Journal, the observations indicate an outburst somewhere between a “classical” and a “dwarf” nova.

Stellar outbursts
The US-based Universities Space Research Association (USRA) explains that both the previously known and new phenomena result from white dwarf stars that represent the dense remnants of a star in the final stage of its evolution.

In a “classical” nova, the white dwarf accumulates material from a nearby companion star similar to our own Sun, with the additional material eventually creating such an extreme build-up of pressure that it initiates a nuclear explosion, ejecting the material from the surface of the white dwarf.

“This creates a bright burst of light that lasts a few weeks to a few months, sometimes even years,” adds USRA. “Together, the pair of stars is called a cataclysmic variable.”

Although a “dwarf” nova occurs in the same kind of stellar system, the explosion is the result of a different mechanism.

“This type of nova occurs when the disc around the white dwarf becomes unstable causing an outburst that is much less powerful and bright than a classical nova,” says USRA. Such outbursts last only for a few days, and are seen much more frequently than the classical type.

Cataclysmic variable
However, the explosion observed using SOFIA appears different to both of those types of nova. The airborne infrared telescope was pointed towards “V1047 Cen”, a white dwarf and its Sun-like companion that erupted as a classical nova back in 2005 (Nova Centauri 2005).

In April 2019, this “cataclysmic variable” system slowly started to re-brighten. Approximately three months after that started to happen, a team of researchers led by astronomer Elias Aydi from Michigan State University used SOFIA’s FORCAST camera to analyze the system.

FORCAST is a a dual-channel mid-infrared camera and spectrograph that is sensitive from 5-40 µm, typically yielding high-spatial-resolution imagery of star-forming regions of galaxies.

“The thing about dwarf novae is they usually happen relatively quickly," Aydi said. “The majority of them tend to rise to peak quickly and then decline quickly, they don't spend a lot of time at the peak.”

USRA states that the longest dwarf novae have lasted for around 100 days, whereas V1047 Cen went on for more than a year - something that has never previously been observed.

SOFIA superseded
Aydi and his team used the SOFIA spectra to calculate temperature, which indicated heating as a result of the outburst, suggesting it was not a typical dwarf nova.

“It's definitely not a classical nova, but definitely something more than a dwarf nova,” says Aydi. “It's something in between, and likely a combination of different processes or outbursts.”

Although similar to outbursts seen before from systems that feature a white dwarf and a giant companion star, USRA reports that there is no evidence of a giant star in the V1047 Cen system, something that would be easily visible if that were the case.

On top of that, the specific characteristics of the V1047 Cen outburst are subtly different to what are known as “combination novae” - the first of its kind ever to be seen in a cataclysmic variable system that has undergone a recent classical nova eruption. 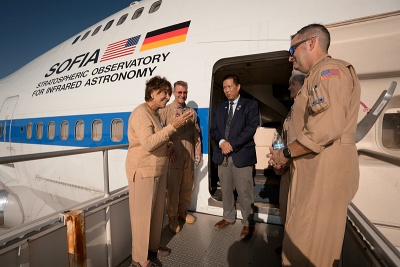 “Finding out what caused this outburst is key to understanding V1047 Cen, and potentially other similarly unusual outbursts that might be discovered in the future,” the USRA report concludes.

“One of the primary steps will be determining how quickly the white dwarf and its Sun-like companion are orbiting their center of mass, which will require additional observations.”

• Those observations will not be made with SOFIA, however. The joint project between NASA and the German Space Agency at DLR, which provided the observatory’s 2.5 m diameter infrared telescope, completed its final science flight in late September following eight years of activity.

The airborne observatory has now been superseded by the likes of the James Webb Space Telescope, which has unprecedented imaging and spectroscopic capability in the mid-infrared spectrum.