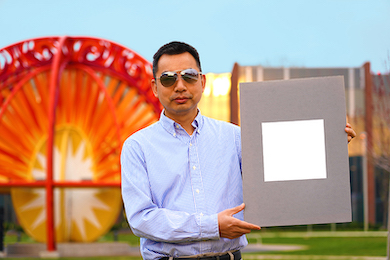 Anything that can reduce the amount of energy required to keep the world's buildings and interior spaces cool is potentially a valuable contribution to efforts at combating global warming.

A team at Purdue University has now developed what it believes to be the whitest paint yet formulated, offering a route to achieving passive daytime radiative cooling from structures coated with the paint.

As reported in Applied Materials & Interfaces, the work builds on and surpasses the team's previous work on how white and reflective a paint could be.

"If you were to use this paint to cover a roof area of about 1,000 square feet, we estimate that you could get a cooling power of 10 kilowatts," said Xiulin Ruan, a Purdue professor of mechanical engineering. "That’s more powerful than the central air conditioners used by most houses."

The cooling effect is controlled by the addition of barium sulfate particles to an acrylic paint. This exploits the high electron bandgap and consequent low solar absorptance, or effectiveness at absorbing radiant energy, of BaSO4 material.

The same compound also demonstrates phonon resonance, a phenomenon related to thermal conductivity and re-emission, at a wavelength of 9 microns, within the infrared atmospheric "sky window" region where the atmosphere absorbs relatively little of the terrestrial thermal radiation emitted from the ground.

Thermal radiation in this window is effectively emitted directly to the "deep sky" without significant contribution to the greenhouse effect, an important natural factor in Earth's habitability.

"In this work, we experimentally demonstrate remarkable full-daytime sub-ambient cooling performance with both barium sulfate nanoparticle films and nanocomposite paints."

Previous work on exploiting the optical and thermal behavior of paint ingredients for cooling purposes has included the use of titanium dioxide, a classic white pigment whose effectiveness for cooling is hindered by its intrinsic ultraviolet solar absorptance.

Photonics approaches to the same problem have seen the design of structures combining integrated solar reflectors and thermal emitters, although such tailored photonic designs are inherently more complicated and usually thicker than a painted layer.

The Purdue solution, intended to be as straightforward and versatile as possible, employs barium sulfate particles of different sizes distributed in the white paint.

"How much each particle scatters light depends on its size, so a wider range of particle sizes allows the paint to scatter more of the light spectrum from the sun," said Purdue's Joseph Peoples. "A high concentration of particles that are also different sizes gives the paint the broadest spectral scattering, which contributes to the highest reflectance."

Using the particles in a nanoparticle film with a broad particle size distribution, the film achieved a solar reflectance of 97.6 percent and an emissivity in the "sky window" of 0.96. This allowed the film to stay more than 4.5 degrees Celsius below ambient temperature, achieving an average cooling power of 117 watts per square meter, according to the project's paper.

In paint form, a barium sulfate/acrylic paint with a 60-percent volume concentration of particles, a level chosen so as to enhance the paint's reliability in outdoor applications, demonstrated a solar reflectance of 98.1 percent and a sky window emissivity of 0.95.

"Overall, our paint shows a standard figure of merit of 0.77, which is among the highest of radiative cooling solutions while providing great reliability, convenient paint form, ease of use, and compatibility with the commercial paint fabrication process," said the project team.