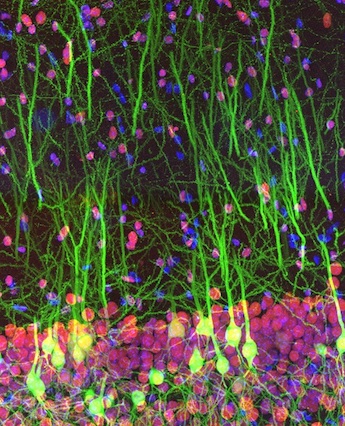 Olympus has announced the winners of its inaugural Global Image of the Year competition, created to recognize 2019's outstanding life science microscopy images on both artistic and visual merits, along with scientific impact and microscope proficiency.

The judges evaluated over 400 submissions from 65 countries before awarding the global prize to Ainara Pintor, a PhD student at Spain's Basque Center for Biophysics, for her image of an immunostained mouse brain slice imaged with two fluorophores. She named her winning image Neurogarden, as a reflection of the brain's complexity.

Neurogarden was created using a super-resolution confocal microscope system, and shows the immunostaining of a brain slice from a Thy1-EGFP mouse, a transgenic animal bred for such fluorescence microscopy studies. The imaging used two fluorophores, with the excitatory hippocampal neurons expressing a green fluorescent protein, while proteins associated with fat and obesity appear red. Cell nuclei were labelled with a blue stain.

"There are over 70 million neurons in a mouse brain," Pintor explained. "This is an example of what we can observe in the hippocampus of a single brain slice, in this case taken from Thy1 transgenic mice. It's a fantastic feeling that this image will cross borders and be seen all over the world."

In addition to the global award, three regional prize winners were also named. The Americas prize went to Tagide deCarvalho from the University of Maryland, Baltimore County for a fluorescence image showing the inside of a tardigrade.

Alan Prescott of the School of Life Sciences at the University of Dundee won the Europe, Middle East and Africa regional award by imaging a frozen section of the head from a mito-QC mouse, a transgenic animal expressing a pH-sensitive fluorescent mitochondrial signal. 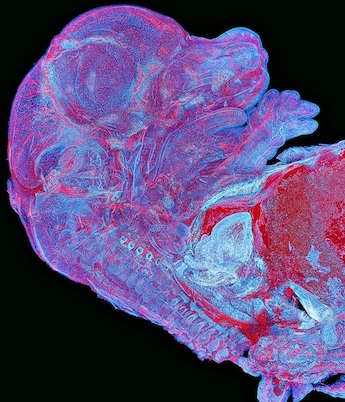 The Asia-Pacific regional prize was given to Howard Vindin from the University of Sydney, for a photo showing the autofluorescence of a mouse embryo, in which the vasculature (red) and structural features of the developing organs, muscles and bones (blue and white) were created from 950 image tiles stitched together. All the Global Image 2019 winners have an established record of microscopy and biophotography expertise behind them.

Olympus created the Global Image of the Year competition as the successor to its Image of the Year European Life Science Light Microscopy Award, which began in 2017 to celebrate both the artistic and scientific value of microscopy images. Moving the contest onto a global scale aims to encourage people to look at scientific images in a new way, according to the company, and to appreciate their beauty while sharing images with others.

Prior to that contest, the Olympus BioScapes Competition ran until 2014, as a showcase for outstanding images and movies of life science subjects captured through light microscopes.

Commenting on the first Global Image competition, Satoshi Nakamura, Vice President Scientific Solutions Global Marketing for Olympus, said: "I'm so impressed by the amazing response to our first Global Image of the Year Award. The creative image submissions embody our contest's mission of celebrating art in science. We hope this competition continues to inspire people to find beauty in an unexpected place, right under their microscope."