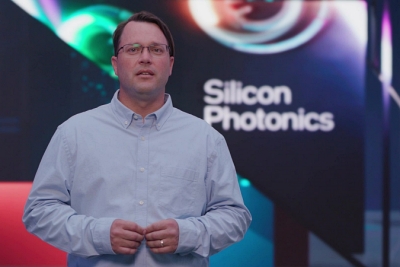 An all-silicon detector and wavelength-multiplexed modulators, both based on micro-ring designs, are two of the critical components being touted by Intel as key developments for much greater use of integrated photonics in data centers.

The California-based chip maker, which has been working on silicon photonics technology for more than 15 years, said during last week’s “Intel Labs Day” that the latest advances represent “critical progress” in optical interconnects, with the potential for billions of the components to be deployed.

James Jaussi, senior principal engineer at Intel and director of the firm’s “PHY” research lab, said in a presentation (see video below) for the virtual event: “The rapid progress Intel is making in integrated photonics will enable the industry to fully re-imagine data center networks and architectures that are connected by light.

“We have now demonstrated all of the critical optical technology building blocks on one silicon platform, tightly integrated with CMOS silicon.”

If deployed in the form of optical interconnects between data center servers, the approach promises to overcome cost, power and size constraints - and provide a solution to what Intel refers to as the “input-output power wall” facing conventional data centers, where the power required to string servers together limits that available for computing.

Multiplexed micro-rings
Several advances in component design are being progressed, with Intel highlighting its recent development of a high-speed, all-silicon photodetector operating at 1310 nm as a critical breakthrough.

Although silicon can detect light efficiently in the visible range and the near-infrared, at wavelengths beyond about 1100 nm more advanced and exotic materials are required, typically germanium, gallium arsenide, or indium phosphide.

But earlier this year, in a post-deadline paper presented at the Optical Fiber Conference (OFC), Intel’s Haisheng Rong and colleagues reported a new micro-ring design operating at 112 Gb/s - fast enough for use in datacom applications.

Fabricated using Intel’s silicon photonics process, the device is able to detect light less energetic than the bandgap of silicon would typically allow. “For sub-bandgap light detection, the photocurrent is generated by a combination of two-photon absorption, surface-state absorption, and photon-assisted tunnelling effects under high reverse bias voltage,” explained the Intel researchers at the time.

“This work proves the viability of using low-cost, silicon-based photodetectors as an alternative to germanium or III-V based detectors for photonics integration and high-speed datacom applications.”

“It’s well-known that optical dominates long distance, long-haul, and metro [networks], and that electrical dominates short distances, board-to-board, and package-to-package. Our research vision was to bring optical input-output into our servers.”

Overcoming the ‘power wall’
Having pioneered early developments such as hybrid silicon/III-V laser architectures, Intel has already sold millions of optical transceivers featuring integrated photonics for use in data centers, connecting racks of servers and switches.

“This is where silicon photonics is shining bright, with room to grow as the cloud and data center ecosystems evolve,” said Jaussi. “Our goal remains [to] revolutionize the data center network by bringing optical input/output directly into our servers, and onto our package.”

If that can be achieved, it implies that optical connections would scale from the millions of rack-level links of today to billions of much shorter interconnects - demanding much smaller photonic chips produced on large silicon wafers to achieve the necessary economy of scale.

Jaussi said that he saw a clear inflection point between electrical and optical links approaching rapidly as bandwidth demand continues to grow, with the “power wall” set to be hit in the early 2020s.

“We have miniaturized the modulator by more than 1000 [times],” he claimed, showing how wavelength multiplexing could support 8-bit or even 16-bit data streams.

"Our long-term goals are a terabit-per-second, per fiber, at a picojoule per bit,” Jaussi added, for links of anywhere between a meter and a kilometer. “By achieving these targets, we can potentially integrate tens or hundreds of terabits per second bandwidth per socket.