Earth-orbiting fleet of observation satellites working together to analyze atmospheric aerosols and pollution from bushfires. 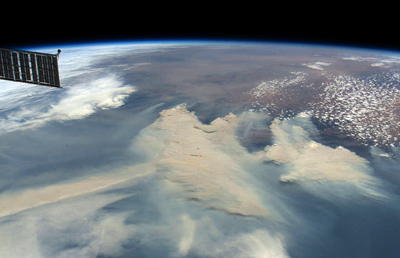 An Earth-orbiting fleet of NASA satellites working together has been analyzing the aerosols and smoke from the massive fires burning in Australia.

So far, the wildfires in the 2019–20 bushfire season, which started around September 2019, have been unusually intense and more widespread and destructive than in previous seasons. By mid January 2020 they had burned an estimated 10.7 million hectares (according to Japan Times/Reuters), destroyed 6,000 buildings and killed at least 28 people.

The fires in Australia are not just causing devastation locally. The unprecedented conditions that include searing heat combined with historic dryness, have led to the formation of an unusually large number of pyrocumulonimbus (pyroCbs) events – fire-induced thunderstorms.

PyroCbs are triggered by the uplift of ash, smoke, and burning material via super-heated updrafts. As these materials cool, clouds are formed that behave like traditional thunderstorms but without the accompanying precipitation.

PyroCb events provide a pathway for smoke to reach the stratosphere more than 16 km in altitude. Once in the stratosphere, the smoke can travel thousands of miles from its source, affecting atmospheric conditions globally. The effects of those events – whether the smoke provides a net atmospheric cooling or warming and what happens to underlying clouds – is currently the subject of intense study.

NASA is tracking the movement of smoke from the Australian fires lofted, via pyroCbs events, more than 15 km high. The smoke is having a dramatic impact on New Zealand, causing severe air quality issues across the country and visibly darkening mountaintop snow. 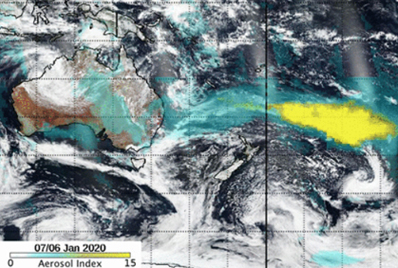 Smoke on the water: VIIIRS imagery provides a “true-color” view of the pollution.

The OMPS series of instruments comprise the next generation of back-scattered UltraViolet (BUV) radiation sensors. OMPS-NM provides unique detection capabilities in cloudy conditions (that VIIRS does not, so together both instruments track the event globally).

At NASA Goddard, satellite data from the OMPS-NM instrument is used to create an ultraviolet aerosol index to track the aerosols and smoke. The UV index is a qualitative product that can easily detect smoke over all types of land surfaces. To enhance and more easily identify the smoke and aerosols, scientists combine the UV aerosol index with RGB information.

Colin Seftor, research scientist at Goddard said, “The UV index has a characteristic that is particularly well suited for identifying and tracking smoke from pyroCb events: the higher the smoke plume, the larger the aerosol index value. Values over 10 are often associated with such events. The aerosol index values produced by some of the Australian pyroCb events have rivaled that largest values ever recorded.”

Beyond New Zealand, by January 8th, the smoke had travelled halfway around Earth, crossing South America, turning the skies hazy and causing colorful sunrises and sunsets. The smoke is expected to make at least one full circuit around the globe, returning once again to the skies over Australia.

NASA’s satellite instruments are often the first to detect wildfires burning in remote regions, and the locations of new fires are sent directly to land managers worldwide within hours of the satellite overpass. Together, NASA instruments detect actively burning fires, track the transport of smoke from fires, provide information for fire management, and map the extent of changes to ecosystems, based on the extent and severity of burn scars.