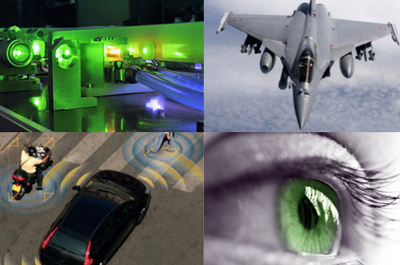 Lumibird Group has reported its trading figures for the first half of 2019, commenting that the diversified laser and lidar systems developer had “significantly strengthened its production capacity during the first half of 2019, particularly for the Lidar Division.” Its statement added, “Following a challenging year from an industrial perspective in 2018, Lumibird is putting itself in a position to accompany growth in its markets, whose potential is still intact.”

The France-based firm said temporary contraction in its first-half operating margin was linked to “the increase in production resources for its lidar business to plan ahead for future growth, as well as the negative seasonal impact on the margin for defense and research contracts.” It added, “The Medical Division is reporting very robust progress, with its operating income boosted by sales growth for products with higher margins.”

The group’s operating margin will be in line with expectations for the second half of 2019 and it is able to confirm its strategic targets for revenues of €150M ($164M) and an EBITDA margin of over 20% for the full year in 2021. 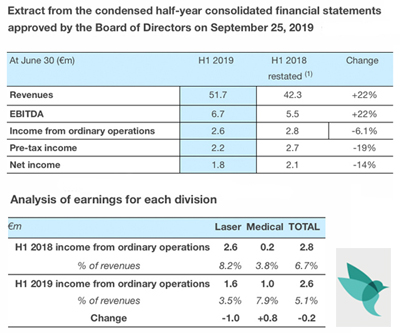 Key data points from Lumibird's first half of 2019 trading (click to expand).

With consolidated revenues of €51.7M, up 22%, the first half of 2019 was characterized by robust industrial and commercial trends, in line with expectations. Lumibird’s Industrial & Scientific Division (+5.6% to €13.3M of revenues) benefited from positive seasonality effects and the strengthening of the commercial organization.

The Lidar Sensors segment achieved 61.9% revenue growth to €8.9M. Besides seasonality, this level of business is linked to complex integration phases at client sites for some of the largest programs. Demand is still strong, said Lumibird and it was “continuing to develop its manufacturing and testing capabilities, resulting in an advanced level of costs in the first half of the year.”

The Defense-Space Division (+37.5% to €11.8M of revenues) is continuing to grow, with sustained demand for the space activities, as well as new accounts and new contracts. The concentration of growth over the first quarter (+111.5%) is linked primarily to the percentage of completion method applied for recording the MegaJoule business, for which the bulk of purchases were made at the start of the year.

The Medical Division (+12.9% to €17.7M of revenues), driven by the success of the new products, new certifications in China and Japan, and its geographical developments, recorded sustained growth over the half-year period.

The Lidar Division’s capacity investments are reflected in costs rising more quickly than revenues. In addition, the overall margin was negatively impacted during the first half of the year as a result of the accounting recognition method applied for the MegaJoule business and certain major development programs. These effects mask the very good performance by the Medical business and the rest of the Laser business.

Lumibird commented that it has further strengthened its sales teams in the US, China and Japan to “deliver on its target growth.” The Group’s technological expertise for Lidars is being developed, with the launch of operations for Lumibird Canada, a new subsidiary employing some of the industry’s leading experts to develop a higher value-added Lidar offering, particularly in North America.

The results statement concluded, “Despite the deterioration in the global economic environment, demand is still strong [our] three strategic segments, with outstanding prospects for development. Second-half growth is expected to be combined with an increase in the gross margin, due to the correction of seasonality effects observed this half-year period. From the second half of the year, Lumibird expects to return to an operating margin rate that is in line with the market’s expectations for the full year.”