One small camera click by a man, one giant photo album for mankind

Zeiss recalls developing its bespoke camera lenses that recorded first visit to the Moon, 50 years ago. 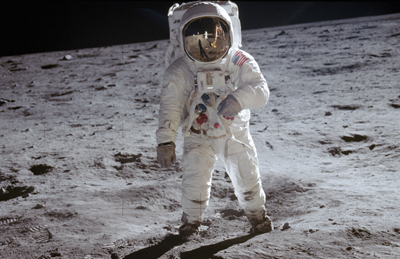 Fifty years may have passed since the first Moon landing, on 20 July 1969, but the unmistakable images, which have this week been widely republished around the world, have lost none of their power to fascinate. In fact, the main reason this event become so firmly entrenched in our collective memory is that it gave us the iconic images captured during the Apollo missions.

These were not only the first photographs ever taken of the Moon’s surface, the image of the Earth as seen from the Moon also continues to inspire people of all generations to this day. And all the images from these missions originated in cameras using lenses developed by optics pioneer Zeiss.

The first Moon landing was also the first global media event. Audience ratings typically amounted to 50 per cent of populations, across the world, which means that an estimated 500 million people followed the event live on television. Many observers still remember exactly where they were when the Moon landing took place.

The history of photography in space took off with the Mercury (1962) and Gemini (1964) programs, which preceded the Apollo missions. Increasingly, camera lenses were bring used in the Earth’s orbit. During these years, explained the company in a release published this week, "Zeiss laboratories further refined the technology and designed camera lenses ready to meet the challenges posed by space." 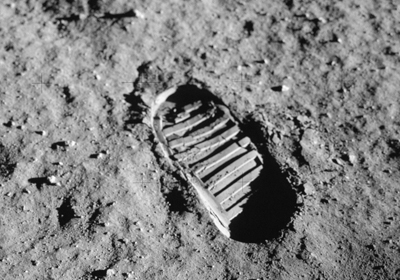 One small step for a man...

Custom lens, made for the Moon

In October 1968, Zeiss received the order for a camera lens to be used during the Moon landing, which was scheduled to take place a mere nine months later as part of the Apollo 11 mission.

“The time for this development was extremely brief,” commented Dr. Vladan Blahnik, who works in research and development at the company. The optical data for the preceding model, the Biogon 4.5 / 38 (f 4.5 / 38mm focal length) still needed to be calculated manually, which was an extremely time-consuming process.

However, a mainframe computer helped to determine the mathematical parameters for the subsequent Zeiss Biogon 5.6 / 60, the camera lens designed for the Moon landing, in just a couple of weeks. Dr. Erhard Glatzel (1925-2002), a leading mathematician from the optical design department at Zeiss, ultimately received the Apollo Achievement Award for this and the development of other special lenses for space photography.

The customized Zeiss Biogon 5.6 / 60 “Moon lens” had to meet a number of requirements. While it was supposed to work within an easy-to-use camera, it also had to precisely map the lunar surface around the landing site. 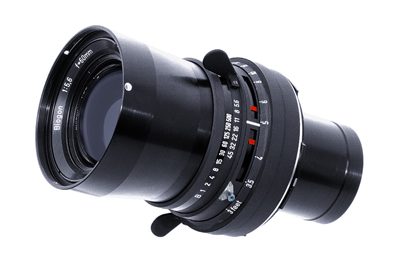 Blahnik explained, “They decided on a camera fitted with a Reseau plate, which created a grid of cross-marks on the images. These made it possible to calculate the distances between individual objects on the Moon.”

“The special symmetric design of the camera lens provided an excellent correction for distortions and all other image errors.” A straight line remains a straight line. Furthermore, the images have great definition and edge-to-edge contrast.

Apart from the Zeiss Biogon used on the surface of the Moon, the company designed a number of other special camera lenses for space photography in the 1960s, among them lenses that could transmit UV-waves or extremely fast lenses such as the Zeiss Planar 0.7 / 50.

The company added that it continues to benefit from this research into the present day. Some examples are in the development of faster lenses for professional movie cameras, lenses for aerial photography used in surveying the Earth’s surface, and lithographic lenses employed in the production of microchips.

The camera lens made a significant contribution to the Apollo 11 lunar mission. But, interestingly, the cameras with the Zeiss lenses are still up there on the Moon, because to make the return journey, the astronauts needed to save every gram in order to take back as many samples of Moon rocks as possible; so only the valuable exposed film made it back to Earth. 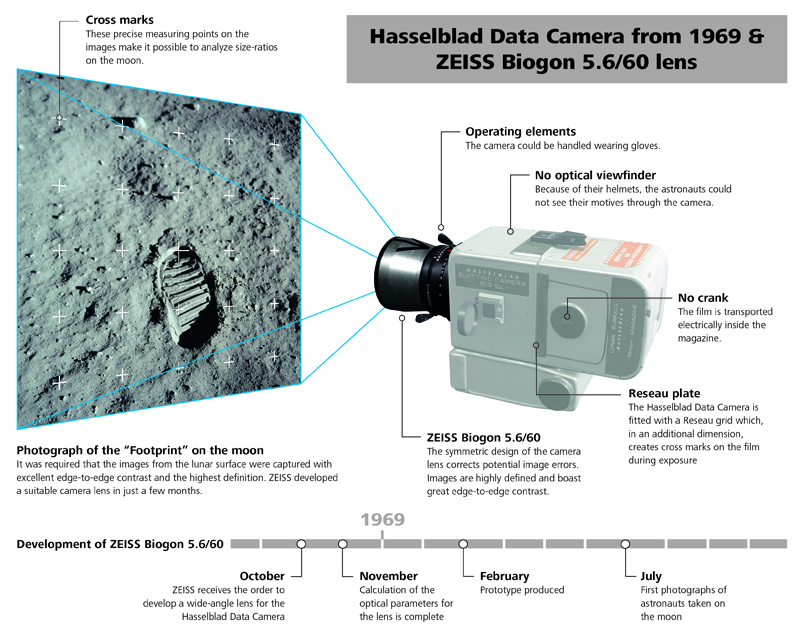 How Zeiss did it: the specification, operation and development timeline of the special Moon lens.