“Digital photonics processing along the lines of Industry 4.0” anticipates higher speeds and smarter metal parts, defined by their functionality, thanks to lasers. 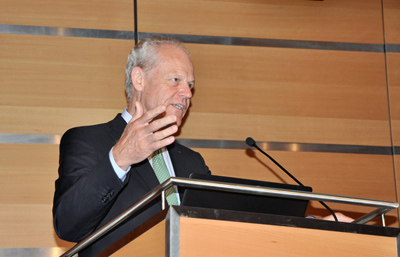 When Reinhart Poprawe, managing director of the Fraunhofer Institute for Laser Technology, addressed the Lasers In Manufacturing conference in Munich on Monday, the packed event – Digital Photonic Production Along The Lines of Industry 4.0 – offered a great deal more than just a technical tutorial.

For Prof. Poprawe, who is also Professor of Laser technology at RWTH Aachen University and Chairman of the Fraunhofer Light & Surfaces Group, has announced that he will be retiring this fall, after a professional life dedicated to industrial laser innovation.

Before the presentation, hosted by the German Scientific Laser Society (WLT), Prof Andreas Tünnermann, head of the Fraunhofer Institute for Applied Optics and Precision Engineering, paid tribute to Poprawe's work: “Throughout his professional life, ‘Poppi’ has shaped technological progress in photonics as well as building up the next generation of young talent for this industry.” Prof. Poprawe was also presented with various gifts.

The spectrum of Fraunhofer ILT innovations during Prof. Poprawe’s tenure ranges from the development of Innoslab lasers and the first diode-pumped multi-kilowatt solid-state lasers to the development of high-power ultrashort pulse lasers, through to development of laser powder bed fusion and extreme high-speed laser material deposition.

On average, a patent was filed every three to four weeks during the decades of Poprawe’s work at Fraunhofer ILT. Over the course of 20 years, around 30 companies were founded in this environment, which Prof. Poprawe actively supported with his networks during the critical initial phase. 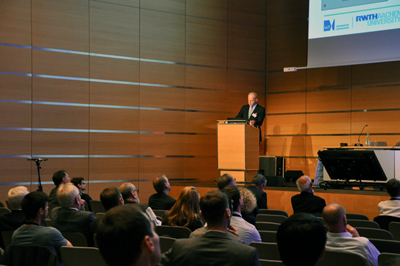 Thanks, Poppi: Prof. Poprawe was warmly applauded by his audience

“It is by this process that I moved towards the idea of digital photonics processing along the lines of Industry 4.0. In this way, I am encompassing a range of technologies – digital photonics production, additive manufacturing, the laser metal deposition technique EHLA, laser powder bed fusion, ultrafast ablation, as well as sustainability and recycling, and industry 4.0.”

“A key question here is where does LPBF go next? We are now shifting it to series production, and the first example of this is now happening, notably at BMW. If you optimize this process then you can arrive at a break even point of up to 100,000 parts per year, which they are doing.

But Prof Poprawe warned that “today’s productivity level is still way too slow, we need to increase the rate of this process by a factor of at least 30 to 50.”

Concluding on a positive note he said, “with the application of digital photonics production we are enabling a smooth transition from bits to photons to atoms. Using light as a tool means the following: the highest power density and the highest speeds, the shortest interactions, meaning the greatest precision.

“Laser materials treatment is a process which is mass-less and force-less with no tools and finally enables the best controllability, from CAD to product.”