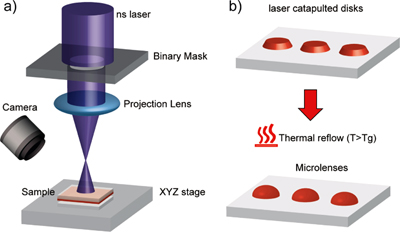 A growing number of applications, including smartphone cameras, depend on microlenses to boost performance. A newly-developed technology, called laser catapulting, could make it easier and less expensive to fabricate these miniature lenses with customized properties, such as shape or focusing power.

Researchers from Istituto Italiano di Tecnologia (Italian Institute of Technology), Genoa, describe their new laser-additive method for creating microlenses using a single laser pulse in a paper in Optical Materials Express. The technology can even allow microlenses and microlens arrays to be fabricated directly on cameras or solar cells.

Microlenses improve the performance of cameras and solar cells by concentrating light into the most sensitive areas of the devices. For example, they are widely used in the newest smartphone cameras to increase sensitivity and imaging speed in low-light conditions.

"Our fabrication approach simplifies the production of lenses while allowing more variety in the design and more flexibility in the environments where microlenses can be used," said research team leader Martí Duocastella. "In addition to completely new applications, this method could lead to new cameras that acquire video under low light conditions, solar cells with improved efficiency and microscopes that are better at capturing fast processes."

Although micro-optics are commercially available, they can be prohibitively expensive and hard to add to existing devices. Even with traditional microlens fabrication methods such as photolithography, it is difficult to integrate lenses or to make very densely packed microlens arrays.

The researchers developed catapulting to overcome these limitations. The method uses a laser pulse to remove and catapult a micro disk from a thin polymeric film and drop it onto a defined region of interest. The polymer in the microdisk is then heated so it can thermally reflow, allowing capillary forces to shape the microdisk into a round lens. Changing the shape of the laser beam allows fabrication of microlenses with different focusing properties or shapes, such as rectangular, triangular or circular.

"Laser catapulting connects the dots between existing laser-based fabrication methods to solve problems with current microlens fabrication strategies," said Duocastella. "It fills the gap between the growing number of applications that require microlenses and the technologies capable of generating on-demand customized micro-optics."

After studying the relationship between the laser beam shape and the resulting microdisks, the researchers explored the reproducibility, precision and accuracy of their technique. Their analysis showed that the method could be used to reproducibly produce microlenses with radiuses between 50 and 250µm and high smoothness. Measuring the optical properties of the microlenses and the light collection capabilities of microlens arrays made with the technique showed that these micro-optics exhibited diffraction-limited performance.

The researchers say that laser catapulting could be combined with fast laser beam shaping methods for on-the-fly control of optical performance and shape of individual microlenses within an array. 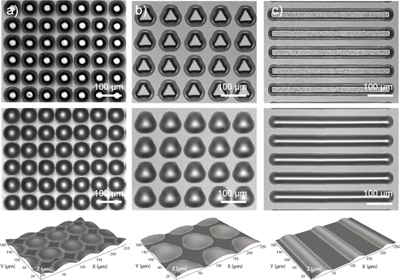 The researchers are planning to use laser catapulting to fabricate microlenses on top of photodetector arrays so they can develop a high-speed 3-D microscopy system to characterize rapid biological processes, such as neuronal communications or virus trafficking. The microlenses will increase the light-collecting efficiency of the photodetectors and thus decrease imaging time.

"These novel photodetector arrays offer important advantages compared to confocal microscopy but can't collect as much light as traditional single point detectors," said Duocastella. "We believe that microlenses, and laser catapulting in particular, will help improve the performance of these photodetector arrays and expand their use among the microscopy community."

The Optical Materials Express paper states: "Laser catapulting is a single-shot laser-additive manufacturing method that enables the rapid fabrication of microlenses with various geometries including circular, triangular, and rectangular by simply adjusting the beam shape. As experimentally demonstrated, LCP is a highly reproducible process capable of individually controlling the microlens optical power, curvature, and geometry.

"The deposition of solid microdisks enables, in a single laser shot, the preparation of 100% fill-factor uniform or multifocal MLAs. By combining LCP with fast beam shaping methods such as spatial light modulators or acusto-optofluidics, we anticipate the on-the-fly control of the individual geometries and optical performance of the microlenses within an entire MLAs.

"Various applications require micro-optics to increase photon collection efficiency, but they come with particular demands that current fabrication methods cannot accommodate. The ease of implementation, in-situ fabrication, and high level of control offered by LCP, including the geometry of the microlenses, will help to fill this void and expand the usage of micro-optics to novel and fascinating industrial and scientific areas."