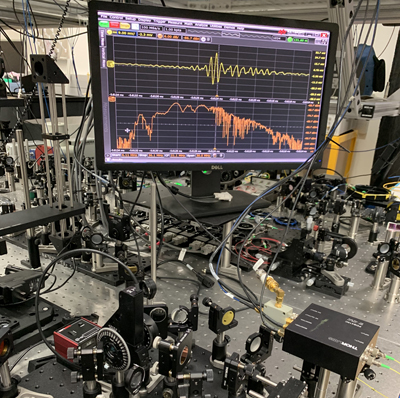 Researchers at the US National Institute of Standards and Technology (NIST) and collaborators have demonstrated a compact frequency-comb apparatus that rapidly measures the entire infrared band of light to detect biological, chemical and physical properties of matter.

The international research team, which comprises scientists from NIST, ICFO, Spain, the University of Campinas, Brazil, and UK-based defense company BAE Systems, has demonstrated a compact frequency comb device that measures the entire infrared band of light at video rates. This enables the detection of biological, chemical, and physical properties of matter.

NIST says that the setup, which occupies just a few square feet of optical table, has potential applications such as disease diagnosis, identification of chemicals used in manufacturing, and biomass energy harvesting. The work is described in Science Advances.

Optical frequency combs measure exact frequencies, or wavelength of light. Various comb designs have so far enabled the development of next-generation atomic clocks and show promise for environmental applications such as detecting methane leaks. Biological applications have been slower to develop, in part because it is difficult to directly generate and measure the relevant infrared wavelengths.

To showcase biological applications, the NIST team used the new apparatus to detect “fingerprints” of NIST’s monoclonal antibody reference material, which is a protein made of more than 20,000 atoms that is used by the biopharmaceutical industry to ensure the quality of treatments.

Mid-infrared light is an especially useful research probe because molecules usually rotate and vibrate at these frequencies. But until now it’s been difficult to probe this region due to a lack of broadband or tunable light sources and efficient detectors such as those available for visible and near-infrared light, the part of the infrared spectrum closest to visible light.

The new NIST apparatus overcomes these problems. Simple fiber lasers generate light spanning the entire range used to identify molecules—that is, mid-infrared to far-infrared wavelengths of 3-27µm (frequencies of approximately 10-100THz). The amounts of light absorbed at specific frequencies provide a unique signature of a molecule. The new system is innovative in detecting the electric fields of the absorbed light using photodiodes (light detectors) operating in the near-infrared range.

“A unique feature is that we detect signals in real time by rapidly sampling the infrared electric field with a near-infrared laser,” said Diddams explained. “This has two advantages: It shifts the detection from the infrared to the near-infrared where we can use inexpensive telecommunications photodiodes, and we no longer suffer from the limitations of infrared detectors, which require cryogenic (liquid nitrogen) cooling.”

The researchers detected signature vibrations of three bands of amides (chemical groups containing carbon, oxygen, nitrogen and hydrogen) in the monoclonal antibody reference material. Amide bands in proteins are used to determine the folding, unfolding and aggregating mechanisms. Specific features of the detected bands indicated that the protein has a sheet structure, agreeing with previous studies. Sheets connect chemical groups in a flat arrangement.

Besides biological applications, the new apparatus might be used to detect interactions between infrared light and condensed matter for quantum computing approaches that store data in molecular vibrations or rotations. In addition, when combined with novel imaging techniques, the tabletop system could obtain nanometer-scale images of samples that currently require the use of a much larger synchrotron facility.