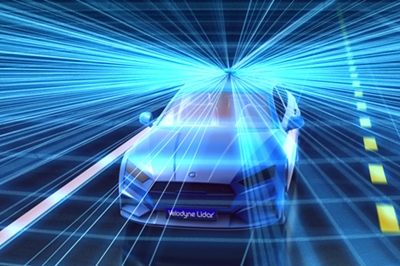 Velodyne Lidar and Quanergy Systems, two Silicon Valley companies at the forefront of the fast-growing lidar industry, have clashed over a decision by the US Patent Trial and Appeals Board (PTAB) favoring Velodyne.

Following a challenge brought by Sunnyvale-based Quanergy, the PTAB’s May 23 decision upheld the patentability of all the claims covered in Velodyne’s US patent 7,969,558.

Drawings accompanying the ‘558 patent, filed by Hall back in 2006, show the lidar system detailed perched on the top of a truck, similar to the “upturned bucket” lidar systems often seen in early incarnations of self-driving vehicles.

Enforcement options
Velodyne’s president, Marta Hall, said in response to the PTAB’s decision: “The ruling was not a surprise, because real-time surround view lidar was invented by our founder, David Hall, and the company holds a number of foundational patents relative to this technology.

“We are an invention-based company and will always be inventing and innovating technologies, so we take protecting our hard-earned intellectual property seriously. In response to the ruling, we’ll be evaluating our enforcement options moving forward.”

Unsurprisingly, Quanergy has since hit back. It now plans to appeal the PTAB decision, and says it is “considering enforcement options” of its own intellectual property against Velodyne.

“The PTAB’s statement that Velodyne’s ‘claimed invention is more likely than not the result of innovative steps rather than obvious ones’ flies in the face of objective evidence based on prior art that was presented to the PTAB according to Quanergy,” responded Quanergy in a statement released June 5.