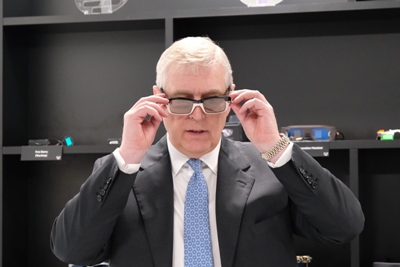 The NYSE-listed company, which has already shipped hundreds of thousands of similar components fabricated on smaller wafers, says that the move to 300 mm-diameter material – the same size used in silicon semiconductor production – will help make AR wearables more affordable for consumer applications.

Corning adds that it plans to ramp production of the large-size wafers throughout the rest of the year.

“These advancements in our glass-making capabilities enable customers to create immersive, high-quality AR experiences at price points that will facilitate wider adoption of AR technology.”

One of the company’s key partners is UK-based diffractive waveguide designer WaveOptics, which signed a long-term supply deal with Corning in late 2018 – shortly after Wave Optics had raised $26 million in a series C round of venture funding.

WaveOptics’ CEO David Hayes said at the time: “Our waveguides meet a demanding technical specification that provides a comfortable viewing experience with crisp imagery, displayed over a wide instantaneous field of view. Corning’s high-index glass has the characteristics that we need to enable the superior optical performance of our waveguide technology.”

Image quality ‘vital’
In January, the two companies showed off the technology at the Consumer Electronics Show (CES) in Las Vegas, with Hayes adding: “The combination of our waveguide technology and Corning’s high-index glass will be a key enabler of immersive AR, where image quality is vital to driving mass adoption.”

WaveOptics has since moved into a new headquarters near Oxford, and the building officially opened with royal fanfare just over a week ago (see photo above).

Hayes remarked on that occasion that the move to a new and larger building reflected the speed at which the company has grown. Having started up in 2014 with the goal of becoming the key provider of optical components for AR wearables and smart glasses, it now employs more than 70 people across sites in the UK, US, and Asia.

In technical terms, the WaveOptics technology combines a small form factor waveguide with a large “eye box” – the phrase used to describe the two-dimensional space in front of the eye within which a viewable image is formed.

With conventional designs, three separate gratings are needed to create an eye box of sufficient area for comfortable viewing – but this approach compromises the ability to keep the overall size of the wearable technology small and lightweight.

Diffraction regions
The components designed by WaveOptics instead employ two distinct diffraction regions: an input grating where light from the light engine is first coupled into the waveguide; and an output grating comprising a two-dimensional array of nanostructures with a specific periodicity and symmetry.

The nanostructures redirect some light out to the wearer's eye, but “recycle” a portion back into the waveguide and on towards the next diffractive structure. Repeating this cycle through the entire array effectively expands the guided wavefront in two dimensions, increasing the eye-box viewing area.

WaveOptics has said previously that the flatness, refractive index, and parallelism of the waveguide glass produced by Corning are crucial for ensuring image quality with low scatter and high contrast.

The two companies are working on further refinements with even thinner waveguides, which should result in smaller and more lightweight AR glasses. The shift to 300 mm-diameter wafers by Corning should mean that such products can be sold at affordable prices.