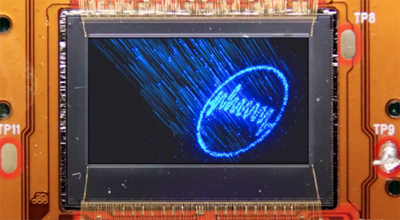 Said to be the world's first GaN-on-Si HD microLED display.

Embedded technologies developer and microLED specialist Plessey has announced a significant milestone in the development of its monolithic microLED displays alongside its backplane partner, Jasper Display Corp (JDC).

Wafer level bonding poses significant technical challenges and has not previously been achieved between a GaN-on-Silicon LED wafers and a high-density CMOS backplanes.

The firm’s microLED display features an array of 1920×1080 (FHD) current-driven monochrome pixels on a pitch of 8µm. Each display requires more than two million individual electrical bonds to connect the microLED pixels to the controlling backplane.

Dr Wei Sin Tan, Director of Epitaxy and Advanced Product Development at Plessey, commented, “This is a momentous milestone in the development of our monolithic microLED display technology. This is a world first, what the industry has been waiting for, and it opens up a new market for microLED emissive display applications.”

JDC’s VP Marketing and Product Management, T.I. Lin, added, “Our JD27E series demonstrates our ability to deliver what Plessey and the wider industry has been waiting for – silicon backplanes designed with their microLED display requirements in mind.”

At SID Display Week, which runs through Saturday, May 18th in San Jose, Ca., Plessey is presemting its microLED technology. 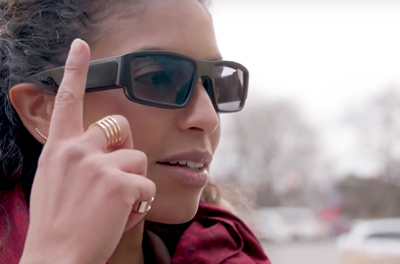 Vuzix Blade; a design and development partnership with Plessey.

Vuzix, a developer of smart glasses and AR technologies, and Plessey, have announced an display device design and long-term supply agreement. This will support the development of next-generation AR products and solutions that combine Plessey’s microLED light source technology with Vuzix’s experience and IP in smart glasses and associated optics technologies.

Vuzix has already developed an evolving family of smart glasses culminating in the Vuzix Blade, the next generation smart display with a see-through viewing experience via its proprietary waveguide optics. Formed from glass with precision nanostructures, the waveguide enables users to see high-resolution computer-generated graphics, images and information superimposed over images from the physical or real world.

Plessey says its microLED solution will “significantly simplify existing smart glasses’ complex optical system of red, green and blue light sources and their additional optics by replacing it with a single self-emitting display which has integrated micro-optical elements.” Size, weight and power reduction are key considerations in the AR wearables market.

Existing light source systems have considerable losses all the way through to the waveguide and the optical systems around them are bulky and complex, whereas an emissive microLED has very simple optical requirements, allowing for a much smaller footprint with minimal system losses by placing the light source directly in front of the waveguide.

Paul Travers, President and Chief Executive Officer at Vuzix, commented, “Plessey’s microLED technology represents a key part of the solution needed to bring the form and functionality of Vuzix next generation smart glasses to the look and feel of fashion forward glasses, solutions the world.”