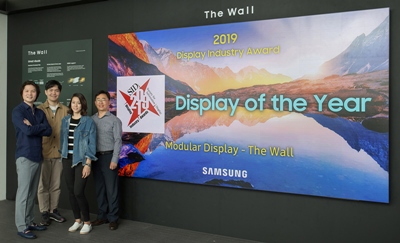 Samsung and 'The Wall' microLED display

Engineers at the Leti research institute in Grenoble, France, claim that their new way of producing microLEDs will be a “game-changer” for high-performance displays, offering superior image quality and energy efficiency compared with today’s LCD and organic LED (OLED) designs.

Presenting recent developments on May 14 as part of the “Display Week” event in San Jose, California, François Templier and colleagues detailed a new manufacturing process that combines light-emitting semiconductors with silicon-based driver circuitry.

The evolution of large-size displays with ever higher demands on image resolution means that faster electronics are required to drive all display types, including the new microLED format now being commercialized by Samsung, among others, that feature millions of individual pixel emitters.

However, existing driving circuits based on thin-film transistor (TFT) active matrix designs are currently unable to deliver the demanding combination of current and speed required.

Leti’s new approach fabricates CMOS-driven, high-performance GaN microLED displays with a simplified transfer process that is said to eliminate the use of the conventional TFT backplane.

Red-green-blue microLEDs are instead stacked directly onto a micro-CMOS circuit, before each unit is transferred onto a simple receiving substrate and the light emitters and the backplane are fabricated together at wafer scale, on a single semiconductor processing line.

Proof of concept
As well as increasing power and driving speed for higher performance, the process is said to avoid several costly steps that are currently necessary for making electrical and mechanical contacts between microLEDs and the receiving substrates.

Eyeing applications ranging from smart watches to extra-large TVs, the Leti team adds that the new approach could overcome some of the significant barriers that face microLED displays as they are positioned for commercialization.

The technology, which has emerged relatively recently as a potential new format for high-performance displays, is the subject of several sessions and dozens of technical talks at the San Jose event, hosted each year by the Society for Information Display (SID).

Among those presenting on the topic this time around are the likes of Sony, Intel, LG Display, and Samsung, alongside supply-chain companies including equipment firm Aixtron and the GaN materials developer Allos Semiconductors.

Samsung was one of the winners of SID’s annual awards, for its large-scale modular microLED design, dubbed “The Wall”. Comprising millions of individual pixels of self-emitting inorganic red, green, and blue microscopic LED chips in a bezel-free design, it is aimed at high-end and corporate applications.

The Korean electronics giant remarked that the combination of pure black imagery with true color and “unmatched clarity” offered by its microLED technology will push the entire industry forward. 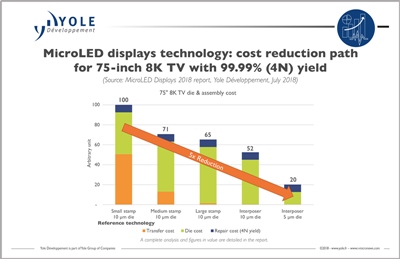 Valley of death
Apple has previously been the subject of rumors that it would use microLEDs in future smart phones and watches, taking advantage of the higher brightness and better electrical efficiency compared with OLED screens, and eliminating problems like burn-in times and screen degradation.

The approach may even find applications beyond phones and TVs, with UK-based LED developer Plessey Semiconductors announcing at SID a development and supply deal with the augmented reality (AR) smart glasses company Vuzix.

However, the cost of microLED technology remains the key roadblock to commercialization. Last year analysts at the France-based consultancy Yole Développement said that the cost and complexity of some approaches were “staggering”.

Yole’s analysts see credible cost reduction paths for microLEDs in TV, AR and virtual reality, and wearables applications, but warned that to compete with OLEDs in smart phones implied pushing microLEDs towards the likely limit of the technology in terms of die size.

“Microdisplays for AR and head-up displays (HUD) will be the first commercial applications, followed by smart watches,” added the firm. “TVs and smart phones could follow 3-5 years from now.”