There is a “mountain of research evidence” that VR can be as good as, or better than, traditional human-delivered therapy. 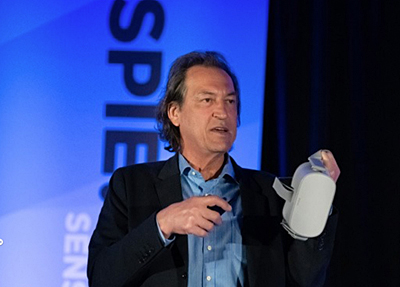 VR therapy: Even better than the real thing.

Where Hollywood meets clinical medical care, recovery begins for many victims, thanks to VR.

Patients, and the SPIE audience at the SPIE Defense & Commercial Sensing (DCS) conference in Baltimore, Md., this week were taken down virtual dusty streets, seemingly in Afghanistan or Iraq, and into clinical treatment rooms, with any one of 40 different VR therapists, trying to help patients with traumas they needed to forget, like Vietnam, or the World Trade Center attacks.

The virtual approach not only was accepted by soldiers with PTSD, it seemed to have won the day over real humans, in dramatic results shown to the SPIE audience this week.

Albert “Skip” Rizzo III, a leading Virtual Reality innovator for 20 years, and professor of gerontology at UCSD, made a convincing case that VR can outperform humans in the clinic for a broad range of treatments.

Rizzo, a plenary speaker at the conference, took his audience into clinical interviews done entirely by virtual staff and, in the end, presented the patients’ rating: a strong thumbs up. “With the software only, they felt more comfortable than when they were told that a human was actually in charge behind the scenes,” he said.

He presented a mountain of research evidence that VR can be as good as, or better than, traditional therapy. “VR shows its superiority for many approaches.” It works, Rizzo said, for PTSD among the military, the police, for first responders, for victims of terrorist assaults.

The VR system can, for example, provide a Vietnam helicopter thundering overhead, and can let the clinician create the pace, and set the details of events in advance. The clinician has a “Wizard of Oz control panel,” Rizzo said.

His overview of VR in clinics, showing veterans and others wearing inexpensive stand-alone headsets, seemed to answer his own question, in his talk’s title: “Is clinical virtual reality reader for prime time?”

With the emergence of true 5G – the next generation of cellular technology – the future seems bright for streaming of VR display simulations to patients in many settings, Rizzo said.

In several gripping scenes, Rizzo took the audience along for exposure therapy involving walking on virtual planks between tall buildings for patients with phobias.

Rizzo is also director of Medical Virtual Reality, or MedVR, at the Institute for Creative Technologies at the University of Southern California. That site is one of the open-campus areas created by the US Army Research Labs, which were the subject of an earlier SPIE DCS plenary.

For training of clinical staff members, the VR sessions let them run the show with VR patients who had reported considering suicide. “It gives novice physicians a chance to screw up with virtual patients,” Rizzo said.

For patients needing repetitive exercises to recover from injuries, the VR sessions let them perform more pleasant activities, like raising an only limb to make a fish jump out of the water, or moving an object along a crowded street, rather than just repeating an action. “It can make repetitive movement of hands or fingers more interesting as they move the objects around,” Rizzo said.

In one case, the patient’s therapy involved driving a penguin down a virtual ski slope. Furthermore, the size of screen didn’t seem to matter. “It was for their benefit, whether on a large or small screen, or even on a laptop,” Rizzo said.

The VR approach also allows autism patients interact with virtual humans to practice for job interviews. The VR interviewer could be friendly or cranky, preparing the client for everything they will see at the interview. “It lets them deal with their phobias,” Rizzo said. “Virtual reality assets can make a big difference.”

That is, the VR technique can expose someone to risks that activate their fears, or can distract them, measure results, or motivate and engage, which are the five main capabilities that VR offers. “And VR is just as good as in vivo exposure to risks,” Rizzo said. “It can deliver this with just $200 headsets.”

VR itself does not heal anyone, Rizzo noted. “But it’s a useful tool in the hands of a good clinician. Studies show most patients improved dramatically. People come back and say, ‘I don’t have a problem'.“ Given a subsequent choice, “they choose VR therapy instead of traditional therapy.”