University of Michigan discovery could be used for temperature control in future computers. 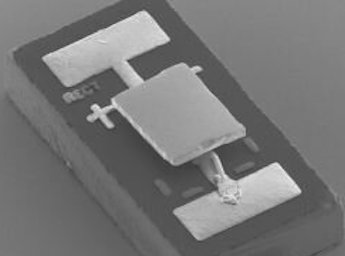 Cool running: a photodiode effectively cooled a nearby component

The concept of laser-driven photonic cooling, in which solid-state structures are able to absorb heat when illuminated by a laser under the right circumstances, has been an attractive one in several temperature-control scenarios ever since the effect was demonstrated. But the challenges involved in applying it to real-world scenarios on a meaningful scale have been considerable.

A group at the University of Michigan has now demonstrated a form of photonic cooling that does without laser illumination, by exploiting what occurred when an LED was wired with a reverse bias to the normal arrangement.

Its findings could make an impact in the arena of computing, as microprocessors become squeezed closer and closer together in the available space. The work was published in Nature.

Photons emerging from the device with energies larger than the device’s bandgap can now effectively reduce the thermal radiation emitted by the diode overall, lowering its temperature below the value it would normally achieve in thermodynamic equilibrium with its environment.

This allowed the team to mimic a photodiode with an effective temperature lower than its actual temperature, and engineer a scenario where it absorbed heat from another, hotter, device close by. The catch, so far, is that the photodiode and the other device need to be very close together—separated by less than a single wavelength of infrared light, to take advantage of near-field evanescent coupling effects.

"At this close proximity, a photon that would not have escaped the object to be cooled can pass into the LED, almost as if the gap between them did not exist," commented the University team.

The group proved the principle by building a minuscule calorimeter, and putting it next to a tiny LED. The two devices were constantly emitting and receiving thermal photons from each other and elsewhere in their environments. But once the LED was reverse biased, it began acting as a low temperature object, absorbing photons from the calorimeter, while the tiny separation prevented heat from traveling back into the calorimeter via conduction. The net result was a cooling effect.

"When they are in each other’s near-field—that is, when the size of the vacuum gap between the planar surfaces of the calorimetric device and a reverse-biased photodiode is reduced to tens of nanometres—solid-state cooling of the calorimetric device can be accomplished via a combination of photon tunnelling, which enhances the transport of photons across nanoscale gaps, and suppression of photon emission from the photodiode under an applied reverse bias," commented the team in its published paper.

"This demonstration of active nanophotonic cooling, without the use of coherent laser radiation, lays the experimental foundation for systematic exploration of nanoscale photonics and optoelectronics for solid-state refrigeration and on-chip device cooling."