Said to be “world’s longest wavelength” output from a single semiconductor laser. 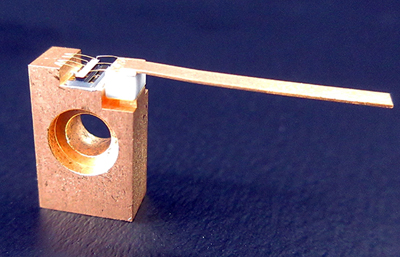 Terahertz nonlinear QCL emits at a wavelength of 450 μm.

Hamamatsu Photonics has announced that it has succeeded in producing terahertz waves at a wavelength of 450 μm in the terahertz range, which the Japanese photonics giant says is “the world’s longest wavelength available from a single semiconductor laser operating at room temperature.”

In its launch announcement, the company stated, “To achieve this breakthrough, we have developed long-wavelength mid-infrared quantum cascade laser, in which we designed the laser structure based on research and analysis results of the terahertz wave generation principle.

“Results from this research will be useful in applications such as quality testing and non-destructive inspection of drugs and foods containing components that absorb electromagnetic waves in the sub-terahertz range as well as submillimeter astronomy and high-speed and high-capacity communication over short distances.” Details of the research supporting this development were published in the journal Nanophotonics.

In 2018, Hamamatsu developed a “terahertz nonlinear quantum cascade laser", employing an anti-crossed dual-upper-state design (AnticrossDAUTM). This QCL produces two mid-infrared rays at different wavelengths within a range from 6 to 11 μm from a single semiconductor device and induces a nonlinear optical effect inside the device.

The QCL acts as a single compact semiconductor laser that operates at room temperature and generates terahertz waves up to a wavelength of 150 μm. To generate electromagnetic waves at even longer wavelengths in the sub-terahertz range, it is necessary to produce two mid-infrared rays at longer wavelengths. This has been extremely difficult to achieve since the longer wavelength light is likely to be absorbed within the device.

The researchers commented, “We investigated the characteristics of many QCLs to clarify wavelength conversion process in a terahertz nonlinear QCL. We found that we can apply the theory of a nonlinear optical effect, called coherent optical rectification, which had not been evaluated before.

“By applying this theory to the wavelength conversion mechanism using the nonlinear optical effect, we optimized the anti-crossed dual-upper-state design to suppress the unwanted absorption of light inside the device, thus allowing output of the two mid-infrared light rays at longer wavelengths up to 14 μm and also increased the wavelength conversion efficiency. In this way, we succeeded in outputting terahertz waves at 450 μm in the terahertz range which is the world’s longest wavelength available from a single semiconductor laser operating at room temperature.”

Other possible applications also include submillimeter astronomy for studying the birth and formation process of stars by observing dust and gases in outer space that cannot be seen with visible light and infrared light. Since the wavelength of terahertz waves is shorter than radio waves commonly used for communication and propagate in the air to some extent, they can be used for high-speed and high-capacity communication over short distances such as within a home, office, or data center.

In the future, Hamamatsu says it plans to develop devices with higher power output by increasing the terahertz wave output efficiency by improving the design of the QCL structure as well as applying a light out-coupling structure and appropriate material for the semiconductor substrate. 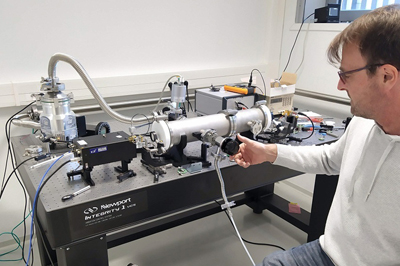 A new advance by a French group promises to increase the sensitivity of high-resolution spectrometers that perform chemical analysis using terahertz wavelengths. This higher sensitivity could benefit many applications, such as analysis of the complex gas mixtures found in industrial emissions and detection of biomarkers of disease in the breath of patients. It could also lead to new ways to detect food spoilage through gas detection.

“Several studies have used terahertz frequencies to analyze industrial gases emitted into the atmosphere, but they have all been hindered by a lack of sensitivity,” said research team member Francis Hindle. “Our new optical cavity will expand the types of molecules that can be identified with terahertz gas-phase spectroscopy and improve the feasible detection level.”

The researchers used newly available components to construct a high-finesse terahertz optical cavity, an arrangement of mirrors and a waveguide that confines light so that it reflects multiple times. High-finesse optical cavities exhibit low light loss and thus allow the light to bounce between the mirrors more times before exiting the cavity.

The researchers plan to expand the range of frequencies for the spectrometer so that it could be used to analyze even more complex molecules and mixtures. “Our research shows that it is now possible to easily construct high-finesse terahertz cavities and use them for the measurement of gases at high resolution. This could contribute to improved monitoring of a large variety of gases present at very low amounts for applications from environmental and industrial pollution to medicine,” said Hindle.