Japanese industrial giant expecting to profit from sales of systems to the Mediterranean, Australia and other sunny parts of the world. 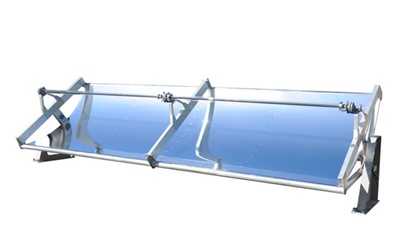 The Japanese company Hitachi Plant Technologies is to target the sunnier parts of the world with a new environmentally friendly air conditioning system based on solar thermal power.

The system is based on a parabolic trough reflector that can track the sun automatically. At the focal point of the reflector is a fluid-filled heat collector tube, which flows into an otherwise typical air conditioning system to provide the energy needed for refrigeration.

Stating that it is now expanding market activity, Hitachi says that it expects the system to be deployed in parts of the Mediterranean, North America, Western Asia and Australia – the so-called “sun belt”.

Hitachi says that the system, which is based around the company’s own proprietary parabolic trough design of solar collector, will drastically reduce electrical power requirements when compared with standard air conditioners during periods of strong sunshine – although it is yet to quantify the impact.

But the company certainly has a huge amount of experience when it comes to industrial systems, and it expects the solar thermal approach to have a much wider range of application beyond air conditioning, in a variety of heat sources.