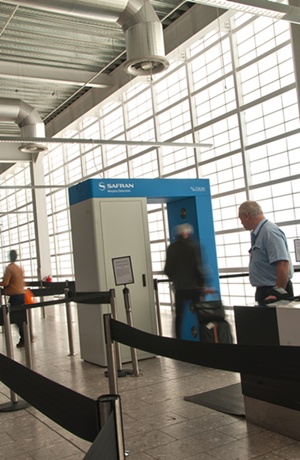 Cascade Technologies, the UK-based company that specializes in quantum cascade laser (QCL) systems, is showcasing a new walk-through optical scanner for airport security at an event being hosted by defense giant Thales this week.

A prototype version of the Cascade system, which can detect gases that indicate the presence of certain explosive chemicals, has already been installed at Glasgow International Airport in Scotland – itself the target of a terrorist incident in 2007 when the driver of a jeep carrying propane canisters attempted to crash into the airport building.

Cascade’s spectroscopic scanner, built in a partnership with security systems supplier Morpho, relies on mid-infrared laser emitters, which operate in the spectral range where many explosive materials and tell-tale gases have "signature" absorption bands. Many explosive chemicals, such as triacetone triperoxide (TATP) – seemingly a popular choice for terrorists – can be identified by their mid-IR absorption features.

Although Cascade won’t say exactly which wavelengths are being used, or the spectroscopic technique employed, the company uses lasers supplied by the Swiss manufacturer Alpes Lasers, which sells both Fabry-Pérot multi-mode and distributed feedback (DFB) single-mode emitters. Alpes was set up by one of the original Bell Labs team led by Federico Capasso that made the first QCLs back in 1994.

Cascade lists lasers with five different emission wavelengths on its web site, ranging from 4.87 µm to 10.07 µm. One of the techniques that it uses is intra-pulse spectroscopy, which produces a large frequency chirp caused by localized heating within the device. This in turn allows a rapid frequency sweep, and delivers very good sensitivity at high speeds.

Upgradeable technology
Cascade told optics.org that the trial at Glasgow has so far proved successful. The scanner has been positioned just before the familiar security/search stage between the land-side departure lounge and the air-side gates. “We would envisage that this technology would, in the end, work in a similar configuration, where it would help to screen all passengers with little or no delay,” said the company. “The current prototype is focused on finding several materials which are indicative of a specific range of explosive materials – but the important thing is that the technology is inherently upgradeable.” 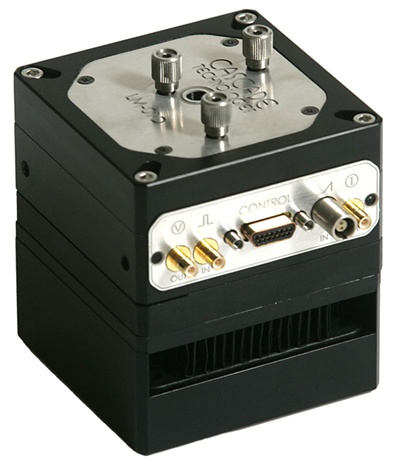 With the first phase of the Glasgow field trial now completed, the next stage of development is currently at the planning stage. “It’s an exciting space and the number of products that we are working on could see QCL technology being integrated in a wide range of security applications,” added Cascade, pointing out that there are many other locations where an adapted version of the simple walk-through scanner could be deployed:

“It is unlikely that a solution for one problem space – aviation security – would be ideally suited elsewhere,” Cascade points out. “Operational constraints are likely to be different. We are currently working on a number of other homeland security technologies, which would be more suited to crowded spaces and stand-off detection.”

“[We are also] developing concepts of operation to suit other environments such as railways and public events. Once these are more mature we would be looking to test in these environments.”

The event being hosted this week by Thales at its Crawley, UK, site – which is adjacent to London’s Gatwick airport – is part of the UK government’s cross-disciplinary initiative to help develop counter-terrorism technologies. Dubbed “INSTINCT” (short for Innovative Science and Technology in Counter Terrorism), the aviation security program is run by Thales and funded through the UK Office for Security and Counter Terrorism (OSCT), within the Home Office.

At the event, called INSTINCT Technology Demonstrator 2 (TD2), attendees will get a behind-the-scenes look at a range of new technologies, processes and ideas that are geared towards improving aviation security.