CIGS developer DayStar on the brink

As new capital fails to materialize, one of the pioneers of CIGS-based thin-film photovoltaics is running out of options to avoid bankruptcy. 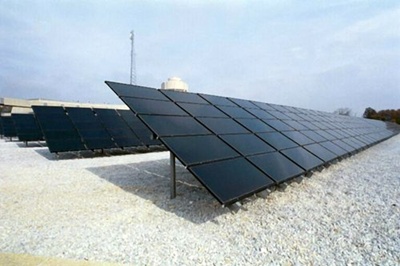 DayStar Technologies, the US-based developer of solar cells based on thin films of copper indium gallium diselenide (CIGS), is struggling to avoid bankruptcy after failing to raise new funds or agree a rescue deal with a strategic partner.

The company, whose proprietary sputter deposition method for producing CIGS cells was initially developed at the National Renewable Energy Laboratory (NREL), continues to be listed on the Nasdaq exchange, and has just reported its third-quarter 2010 financial results.

Although DayStar has at least reduced its costs in recent months – largely thanks to major workforce reductions and being evicted from its premises in California – those results still make for pretty grim reading. For the three months ended September 30, the company posted a net loss of $7.4 million, without registering any income at all.

As CEO Magnus Ryde points out in its latest financial release, DayStar has concentrated on debt and expense reduction recently, as well as seeking ways to raise new funds, or possibly set up a strategic manufacturing partnership. “We continue our discussions with potential strategic partners to pursue opportunities to manufacture our CIGS modules offshore,” Ryde said. “Those potential partnerships, if consummated, could include joint ventures, licensing agreements, contract manufacturing agreements, a reverse merger with or an acquisition of DayStar.”

So far, those discussions are yet to deliver a breakthrough and, as the company wrote in its S-3 filing with the Securities & Exchange Commission (SEC) last month, its options are running out:

Capital requirements
“In order to continue operations, including development and commercialization efforts, we require immediate and substantial additional capital beyond our current cash on hand,” it stated. “As of June 30, 2010, we had outstanding liabilities of $23.7 million and our cash on hand was $24,000. In addition, we need substantial additional capital in order to commercialize our products.”

Although DayStar’s cash position has improved marginally since June, the liquidity problem remains the key issue, and that passage from the S-3 filing concludes: “If we do not raise sufficient capital, we might be forced to file for bankruptcy in the future or otherwise cease operations.”

The concept that DayStar has been working on is to develop a one-step sputter deposition process to produce high-efficiency, large-scale, low-cost CIGS modules on a glass substrate. By combining its proprietary deposition process with commercial thin-film processing equipment already available, the idea was to ramp to volume production and achieve a total module manufacturing cost of less than $1.00 per Watt output power at an annual run-rate of 100 MW.

Having raised $68 million in a follow-on public offering in October 2007, DayStar had appeared to be making progress towards those goals. But it is likely that the company has been stumped by the perennial problem of scaling up the CIGS process sufficiently to produce large photovoltaic panels.

As previously reported by optics.org, the analyst company Lux Research has predicted the demise of a number of high-profile CIGS developers as a handful of leading players emerge within the sub-sector. Miasolé and the Q-Cells subsidiary Solibro are tipped by Lux to be leading players, while Germany-based Solarion recently gained investment from Taiwan that, combined with local support, will enable it to construct a new CIGS fab. 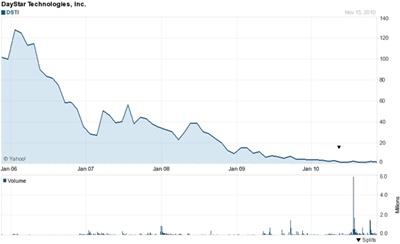 The basic premise of the thin-film CIGS approach – producing relatively high-efficiency modules at a lower cost than the predominant crystalline silicon technology – remains a viable one, stresses Lux in its latest report. Although CdTe technology is on course to remain the cheapest solar technology, with an expected module cost of just $0.54 per Watt by 2015, the cost of CIGS is expected to drop dramatically over the same period - from approximately $1.69 per Watt to today to reach $0.76 per Watt as conversion efficiencies are improved to 14.2 per cent. Both of the thin-film technologies are expected to be cheaper than crystalline silicon at that point, although silicon will continue to offer the highest conversion efficiencies (notwithstanding concentrator systems).

“Crystalline silicon is dominant by volume and remains the cost/price benchmark for solar modules. Cadmium telluride is limited in efficiencies, but is the absolute leader in cost. We project these two technologies will continue to be highly profitable,” reckons Ted Sullivan, a senior analyst at Lux. “The profitability of thin-film silicon is much dicier, but copper indium gallium diselenide is positioned to outplace crystalline silicon in profitability by 2013 as leading developers improve process stability.”