Team operating the giant laser system fired has a 1.3MJ ultraviolet beam at a substitute target and also set a new world record for neutron yield.

The National Ignition Facility (NIF) remains on track to achieve a fusion reaction within the next two years, following a series of key experiments performed within the past few weeks.

According to the NIF team, which is based at Lawrence Livermore National Laboratory, on October 31 it set a new world record for neutron yield from a laser-driven fusion fuel capsule. In this experiment, the 192-beam system sent 121 kJ of ultraviolet light into a glass target containing tritium and deuterium gas - producing 3 x 1014 neutrons through a process known as inertial confinement fusion (ICF).

Two days after that, the NIF team ramped the laser energy up by an order of magnitude to 1.3 MJ. That represents a record for the highest energy to be delivered to an ICF target, and it was enough to produce a peak radiation temperature of approximately 6 million °F. For a comparison, the temperature at the center of our local fusion reactor - otherwise known as the Sun - is 15 million K, according to NASA.

However, this experiment was designed to test the conditions produced within the target, and did not contain a “live” mixture of fuel. 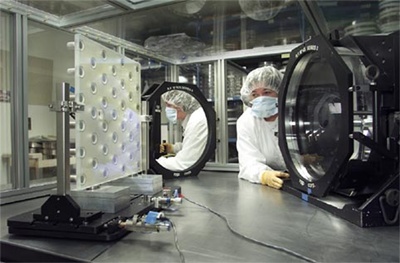 The two latest feats followed a key milestone passed on September 29, when the first integrated ignition experiment was performed at the facility, demonstrating that the various systems required to achieve ICF were working. In that instance, the laser system delivered a 1 MJ shot to a mixture of tritium, hydrogen and deuterium.

“The results of all of these experiments are extremely encouraging,” said the NIF director Ed Moses. “They give us great confidence that we will be able to achieve ignition conditions in deuterium-tritium fusion targets.”

Fusion burn
NIF researchers now anticipate that a self-sustaining fusion burn reaction with a net energy gain could be achievable within the next two years. And although the system has been built primarily with a view towards the stewardship of the US’ nuclear weapons arsenal, similar systems could – in principle – be used to generate electricity commercially.

Moses shared his vision for cities powered by controlled laser fusion at the SPIE Optics+Photonics conference earlier this year, suggesting that a prototype version could be built by 2020, with power stations based on the technology in place ten years after that. Ramping from one LIFE station per year to 18 each year from 2040 onwards, the US could become 25 percent fusion-powered by 2050, he said in his plenary talk at the event.

Such systems would demand very-high-efficiency laser diodes to seed the laser emission, as well as large-scale, high-quality optics and optical components capable of withstanding the enormous neutron bombardment that accompanies a fusion reaction.

Examples of optical technologies developed through the NIF project already include huge deformable mirrors to smooth out aberrations in the laser beams, a plasma electrode Pockels cell that acts as a giant switch, and an 800-pound potassium dihydrogen phosphate (KDP) crystal.

The optical technology requirements may represent a future market for high-precision optics companies, and the market opportunity may expand if the proposed European High Power Laser Energy Research (HiPER) project gets the go-ahead. Led by the UK, HiPER is a consortium of 25 institutions from 11 countries in Europe, and is currently in a preparatory phase of development where it aims to establish both the scientific and business case for laser-driven fusion as a basis for commercial energy production.

This phase has been timed to coincide with demonstration of fusion ignition and energy gain at NIF, and so HiPER's proponents will be encouraged by the latest developments across the Atlantic Ocean. Assuming that the NIF team does make the anticipated progress in the next two years and the European project gets the green light, construction of the first HiPER facility is expected to begin around 2015, with initial operation anticipated by 2020 – although no significant impact on the supply of electricity is anticipated this side of 2050.

One of the key questions facing HiPER in the near term is how exactly the project will be funded if it does go ahead. Given that the existing members of the consortium include some of the more cash-strapped European nations – the six project partners are Greece, Spain, Italy, the Czech Republic and France, along with the UK – further progress at NIF will be crucial to demonstrating the viability of the approach.

* November 12 update: a follow-up discussion with HiPER representatives suggests a slightly different development time frame. The current plan anticipates that construction and commissioning will be completed by 2025, with operations then commencing in "burst mode" to test systems integration and reactor concepts.

Towards the end of the 2020s the laser beams will be switched into a reactor demonstrator area, which will ultimately be able to run for extended periods in order to demonstrate the performance parameters that energy companies will require. This program is expected to continue until about 2035, by which time it is expected to be ready for handing over to utility companies for commercial exploitation.