The optoelectronic component maker crashes 40% in value as investors are spooked by cautious guidance for the forthcoming quarter. 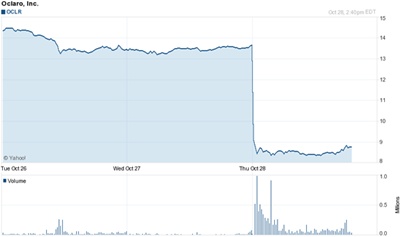 Oclaro saw nearly half of its stock-market value wiped out after announcing results for its first fiscal quarter of 2011. While revenues of $121.3 million were up solidly on the previous quarter, investors appeared spooked by the component maker's flat revenue outlook for the next period.

Oclaro said that it expected revenues in its second quarter, which runs until the end of December, to come in somewhere between $116 million and $124 million. Investors dumped the stock, sending its share price down 40 per cent. The knock-on effect was felt by related companies also serving the optical communications sector, as both JDSU and Finisar saw their value drop by more than 10 per cent.

Considering the impact on the stock, CEO Alain Couder’s prepared comments hardly seemed apocalyptic: “We experienced a slowdown in the rate of revenue growth in late September,” he said. “Accordingly, our guidance for the December quarter is cautious. We continue to have confidence in our position in the market and believe the growth prospects for Oclaro and our customers in 2011 continue to be strong.”

Telecom revenues grew 9 per cent during the reported quarter, with the company posting an operating income of $5.0 million and slightly better than breakeven on the bottom line, with a net profit of $0.4 million – despite worsening gross margins. The profit outlook for the forthcoming quarter is broadly similar.

Limited visibility
But in a call with investors, the company indicated that visibility within the telecom space was very limited, with network deployments slowing. “It’s clear that we are in an unstable period right now, and that’s why we have been cautious,” Couder said, adding that there was a sudden change in mid-September, prior to which Oclaro had been bullish on the prospects for the December quarter. Orders cancelled at that point reduced Oclaro's September quarter revenues by around $4 million, and will also have an impact in the December quarter.

US-headquartered Oclaro, whose main manufacturing sites are located in Europe and China, had witnessed an impressive turnaround since the appointment of Couder in 2007. At that point, the company – in its previous guise as Bookham – was teetering on the brink of survival, but under Couder its fortunes turned around, culminating in mergers with Avanex and Mintera, and its first-ever profitable quarters.

That recovery had been reflected in the share price, too – any investors who buying the company’s stock in early 2009 would have been rewarded with a 1000 per cent gain prior to the latest crash.

Despite the current difficulties, Couder retains confidence in the company’s prospects for next year, in particular with deployments of 40 G technologies, which relate strongly to Oclaro’s acquisition of Mintera earlier this year.