With current capacity of 1.4GW per year, the Shanghai-based manufacturer of crystalline silicon cells says that it is the largest "pure play" cell company in the world. 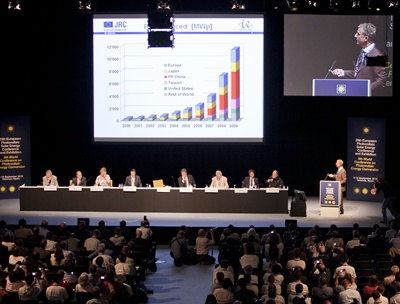 The Chinese company JA Solar now claims to be the largest pure-play supplier of solar cells in the world. Its claim came at an analyst day hosted by JA Solar at the 25th European Photovoltaic Solar Energy Conference and Exhibition (EUPVSEC) in Valencia, Spain.

Unlike some of its major rivals in cell production, such as First Solar and Q-Cells, JA Solar is not vertically integrated, and sells its solar products to module and system assemblers worldwide. Its latest generation of c-Si cells offer an improved conversion efficiency of 18.9 percent, it claims.

Presenting in Valencia, JA Solar’s CEO Peng Fang said that the company’s business outlook remained strong, with good order visibility extending into 2011. Industry observers have been wary about the impact that reduced governmental support through feed-in tariff (FiT) levels will have on the solar market from 2011, although those moves have served to boost the market in 2010, as installers rush to beat the scheduled reductions in support.

But Fang appeared to allay any fears of a severe drop-off in demand from 2011, saying that customer requirements were still exceeding even JA Solar’s huge production capacity.

Production ramp
The Shanghai-based company, which runs production lines in Yangzhou and Hebei, shipped cells capable of producing 311 MW in the second quarter of 2010, and recently raised its annual guidance figure for production shipments to 1.35 GW for 2010 in total.

Depending on which market figures you choose to believe, that figure accounts for up to 10 percent of total global demand for solar cells.

With cell demand still outstripping supply, JA Solar is in the process of increasing its production capacity from 1.4 GW to 1.8 GW per year. That level of production makes it the largest pure-play cell supplier in the world at present, Fang said.

Since China itself is not yet one of the major markets for PV installations, most of the cells manufactured by JA Solar actually end up being deployed in the key solar markets of Germany, Italy and Japan. Market figures disclosed at EUPVSEC by the European Commission’s Institute for Energy suggest that, together, Chinese manufacturers were responsible for just over 4 GW worth of cell production in 2009, out of a global total of around 11.5 GW.

According to the most recent market review and forecast produced by the European Photovoltaics Industry Association (EPIA), the domestic Chinese market was worth only 160 MW in 2009, in terms of PV installations – ranking behind South Korea, Belgium, France and the Czech Republic.

But by 2014, EPIA says that there may be a huge change. Much of China is located in what EPIA describes as the “sun belt”, meaning that it has high insolation, while the expectations of growing support for PV in the country make it one of the most attractive locations for PV investment in the world.

“With high irradiation levels and a surge in electricity demand, the potential for PV in China is huge and depends mainly on government’s decisions,” said EPIA earlier this year. It estimates that annual installations in the country may reach up to 2.5 GW by 2014, assuming high levels of government support through a generous feed-in tariff.