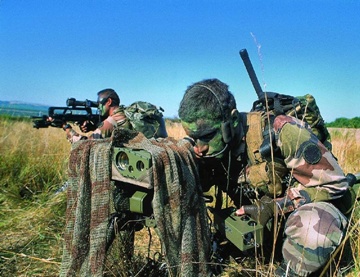 According to Sagem, the defense company that builds the L’Armement Air/Sol Modulaire (AASM) weapons used in the test strike, the new approach yields a higher precision than existing GPS and infrared imaging guidance systems, making it more suitable for urban warfare.

“This was the first firing test in the world using a laser-guided missile with a vertical terminal phase, enabling full control over impact parameters and minimizing the risks of collateral damage,” announced Sagem.

In the vertical laser-guided test fire, carried out in mid-June, the missile was initially fed the GPS co-ordinates of its target. The target co-ordinates were then deliberately shifted by around 100 meters, with the missile fired from an altitude of 4000 meters and a horizontal distance of 25 km.

Despite that, the vertical laser illumination – provided by a DHY 307 ground illuminator that is widely used by the French army – then guided the missile to within one meter of the correct target, after its flight path was adjusted in favor of the laser spot.

The DHY 307 ground laser target designator belongs to the Modular Illuminating Range Finders (TIM) family of products developed by the French optics company CILAS. Intended for use by small ground units, it provides precision guidance for any missile fitted with final laser guidance, and has already been used in combat in Afghanistan.

It operates at a wavelength of 1064 nm, with a x7 magnification and a focusing adjustment of between + 2 and – 6 diopters.

With the vertical laser guidance now demonstrated for a static target, the next stage is to fire a strike at a highly mobile target, and this test is expected to be carried out before the end of the year.

In late 2009, the DGA awarded Sagem with a contract to supply 3400 precision AASMs, with an initial firm order of 680 units. This contract includes qualification and production engineering of the latest laser-guided version, with volume production currently slated to start in late 2012.