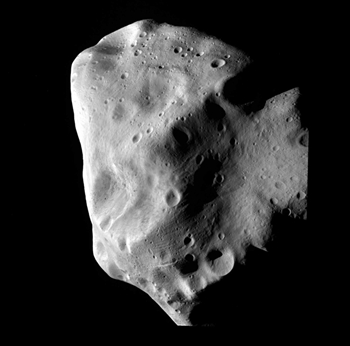 A European space mission has taken spectacular images of one of the oldest objects in the solar system, using CCD technology supplied by a UK company.

The European Space Agency’s Rosetta mission made its closest approach to the asteroid Lutetia on July 10, swinging past the tiny object at a distance of just 3162 km.

Little is known about Lutetia, but the data captured by the mission is expected to confirm whether the asteroid has a metallic or carbonaceous composition. “Lutetia has been a mystery for many years,” says ESA.

The fly-by has already shown Lutetia to be larger than had been previously thought – it is now known to measure 130 km along its longest side, not the 95 km suggested by ground telescopes.

Holger Sierks, the OSIRIS principal investigator from the Max Planck Institute for Solar System Research in Lindau, Germany, said of the Lutetia fly-by: “I think this is a very old object. Tonight we have seen a remnant of the Solar System’s creation.”

One of the key components inside the OSIRIS instrument is the CCD imager, which was provided by UK-based e2v. The on-board component is a customized version of the company’s CCD42-40 line of products, which offer a 2048 x 2048 pixel array and detection from 200 nm to 1060 nm. The version used for the OSIRIS instrument features back-illumination and anti-blooming.

With the European Space Agency (ESA) stating that the mission had performed “faultlessly” for the Lutetia approach, scientists will begin investigating the data collected as Rosetta flies off towards a rendezvous with its primary target – the Churyumov-Gerasimenko comet – scheduled for 2014.

When Rosetta gets there, it will orbit the comet for around 18 months and release Philae, a small landing craft, onto the comet’s surface.

Aside from OSIRIS, Rosetta features a number of optical systems to investigate the comet in detail. These include an ultraviolet imaging spectrometer supplied by NASA, a micro-imaging dust analysis system, and a visible/infrared mapping spectrometer that will identify comet gases and map the solid material and temperature on its surface.

In addition, the Philae lander includes a six-camera imaging and spectrometer system that will take high-resolution pictures during the craft’s descent, and stereo panoramic images of the comet’s surface after landing.

Launched in 2004, ESA’s Rosetta mission is the first to attempt to land on a comet surface, and if successful it will provide the most detailed study of a comet ever attempted.