Despite a year of corporate turmoil, Federico Pignatelli believes that his company will emerge in better shape than ever. 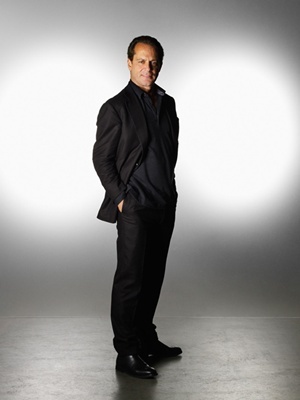 Ever since Biolase began working on dental lasers twenty years ago, Federico Pignatelli has served as a director of the company. But the Rome-born CEO is not your average photonics executive - his colorful biography combines a career in investment banking with forays into fashion photography, as an executive producer of the movie Kill Me Later, and even claims an ancestral connection with a 17th century Pope.

But throughout the turbulent history of the California-based company, he has been a constant presence. The job titles, however, have changed regularly. A director since 1991, Pignatelli has served as executive chairman, chairman emeritus, president, and interim CEO. Now, after a bruising 2010, he is the company’s permanent CEO and chairman.

So just how did this impresario, complete with the Beverly Hills address, get involved with a laser company in the first place?

“I supplied its first one million dollars as a venture capitalist,” Pignatelli explains. “The founders had developed the first Nd:YAG laser for dental use, and when it was released the market clearly understood that this was the start of a revolution in dentistry.”

And pretty much from the start, it’s been a roller-coaster ride. The valuation of Biolase soon rose to $110 million, but that was short-lived, and Pignatelli blames poor management for the subsequent crash in the stock price: “The valuation dropped down to $3 million,” he recalls. “At that point I made a deal for the founders to sell their shares to investors, and stepped in as executive chairman.” It wouldn’t be the last time that he would be making such a personal intervention.

Roller-coaster ride
After restructuring the company in 1994, Pignatelli turned Biolase into a much smaller R&D-focused operation, with annual sales of only $1.5 million, in just a few key markets. Then came a commercial breakthrough: in 1998 Biolase obtained Food & Drug Administration (FDA) approval for hard-tissue and all-tissue dental lasers in the US market. The company changed again. Growing rapidly, Biolase was valued at $500 million by early 2004 and reached sales of $70 million in 2006, achievements that Pignatelli regards as a great success. But the roller-coaster was about to switch directions again.

“In 2006 I decided to step back and let others run the company,” he says. And in an apparent repeat of the problems in the early 1990s, the new executive team managed to drive Biolase to what Pignatelli describes as “the point of bankruptcy”. Time for another intervention:

“The board called me in to run the company again for a few months as interim CEO, and I managed to turn things around,” he remembers. “The company had become loss-making on quarterly sales of $12 million, but I made Biolase cash-flow positive on almost $21 million quarterly sales.”

You can imagine what happened next. “A new CEO, Jake St Philip, inherited a Biolase that had great momentum going forward, as well as $10 million in cash...but one year later the company was essentially bankrupt and the stock had fallen to 40 cents.” The board was soon back on the phone. “I was called upon again to rescue the company, and made a beneficial deal with the medical equipment distributor Henry Schein that was worth $43 million to us.” 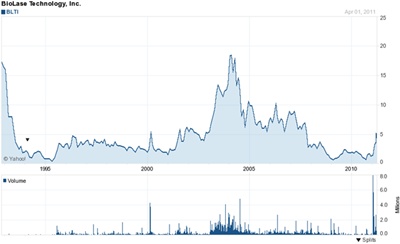 Boardroom acrimony
Since then, there has been time for one more collapse under yet another CEO – this time exacerbated by the knock-on effects of the financial crisis – with boardroom acrimony breaking out in mid-2010. This time, said Pignatelli, enough was enough:

“I had been fighting CEOs and their decisions, and seen them walk away with severance deals worth tens or hundreds of thousands of dollars - even when the company had practically no money in the bank,” he grumbles, adding (not unreasonably). “I think that's scandalous.”

Inevitably, Pignatelli stepped in once again, and was eventually in a position to name half of the board of the company himself. “The incumbent CEO resigned, and in this case, under my watch, he left without a substantial settlement. Since 2010 I have served as chairman and CEO of the company.”

After the boardroom battles of 2010, Pignatelli has changed Biolase’s distribution strategy, and for the moment appears to have stemmed the flow of cash that had threatened the very existence of the company. Biolase became profitable in Q4 of 2010, on both a GAAP and non-GAAP basis, and in the last few months it has raised more than $8 million and paid off a $3 million debt. “This has put the company in a completely different financial position, and its profitability will continue strongly in 2011,” predicted the now-permanent CEO.

Beyond dentistry
Also different is a move into markets beyond dentistry. The company's core technology is based on the ablation of soft and hard dental tissues through the absorption of laser light by water in those tissues. But the same principle lends itself to ophthalmic applications, thanks to the high water content of tissues in the human eye, and Biolase has released the Occulase system for general ophthalmic soft-tissue surgical applications. The treatment of presbyopia (the age-related loss of elasticity of the lens, resulting in a reduced ability to focus) is a particular target, using the laser to alter the nature of the eye's crystalline lens and restoring flexibility lost through calcification. 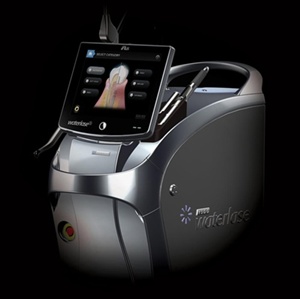 Imaging is another new target sector, intended to complement the dental laser systems that Biolase already offers, through an entirely new company division. “Biolase Imaging will design and distribute extra-oral and intra-oral dental imaging devices, manufactured on an OEM basis by a major European company and priced competitively,” said Pignatelli.

“This is a good fit with the market, since the dentists that decide to invest in Biolase technology are inclined to be progressive, and want to invest in the best diagnostic technology as well. The imaging market is very competitive, but customers increasingly want to deal with one entity, rather than a number of different providers.”

$1 salary
One notable aspect of Pignatelli's CEO role that is in marked contrast to his predecessors is his executive remuneration: he receives an annual salary of just $1 from Biolase. Why? It’s a point of principle:

“After seeing many bad decisions by executives, and all of the pain caused for employees, I decided to set an opposite example and work as chairman and CEO for almost nothing,” Pignatelli explains. “It told the management and shareholders that I was not there to take advantage, but instead to make [Biolase] into the great company that it deserves to be.”

“Management should only make money when the company performs, and as the largest single shareholder I will make my money when it does. Biolase has been a $21 stock in the past, and now it's a $5 stock, but the foundation for rebuilding is so strong that I believe we can return to and surpass the $20 mark very quickly. We are a small company, but we have a huge opportunity.”

So, for now, the roller-coaster seems to be on a gentle upturn. Assuming that he remains in charge on a permanent basis this time, Pignatelli will only have himself to blame if things come crashing down again.

Those CEOs in full: 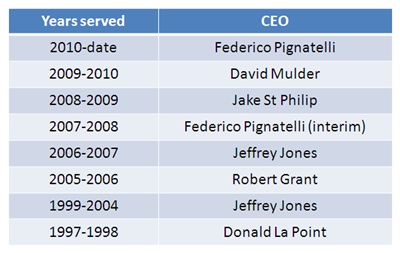