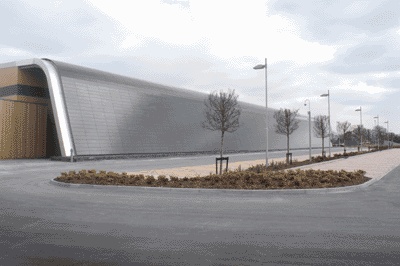 The UK weather is not famous for its clear, sunny skies, and maybe this goes some way to explaining why there is little in the way of a photovoltaics industry in the country at present – despite its leading position in photonics science.

However, since April 2010, when the UK government introduced a photovoltaic feed-in tariff (FiT) for the first time, that has begun to change. Contrary to popular opinion, the UK’s solar resource is a respectable one – or at least on a par with much of mid-latitude Germany – but up until now the renewable energy lobby in the UK has tended to focus on wind as the more obvious eco-friendly choice; sensible enough, as anybody who has holidayed on the British coast will know.

But even though UK electricity patterns are different to much of the rest of the world, with peak demand occurring on dark, cold and windy winter nights, the benefits of solar-generated electricity could still be significant.

At the Photonex conference and exhibition, held in Telford last week and an annual focal point for the UK’s photonics industry, there was a sense that, at long last, the country was starting to get its act together on photovoltaics. In a conference session dedicated to the emerging PV scene in the UK, Stuart Irvine from the Welsh Optoelectronics Forum pointed out the importance of the FiT’s introduction, as well as its escape from any reduction in the government’s recently-announced spending review.

Up and running
“Without the feed-in tariff, you can’t have the industry,” Irvine said, adding that the UK’s solar market was finally now up and running. In fact, the UK market is growing pretty quickly – less than 10 MW had been installed prior to the FiT's introduction, but that figure is expected to shoot up to around 100 MW by the end of 2010. Market analyst Solarbuzz said in September that monthly installations had reached close to 4 MW, with rapid growth expected for the rest of the year.

Of course, that total remains utterly dwarfed by more mature markets. Installations in Germany are expected to be in the region of 7 gigawatts in 2010, with the German Bundesnetzagentur suggesting that more than 2 GW were installed in June 2010 alone. That was partly because of a rush to install systems before cuts to Germany’s own FiT came into effect.

The Bundesnetzagentur has now confirmed that the installers will receive between 21.11 and 28.74 eurocents per kilowatt hour of electricity fed into Germany’s grid in 2011 – a cut of 13 per cent on the previous rate. At up to 41.3 pence (equivalent to 48 eurocents) per kWh, the UK’s initial FiT rate appears attractive. 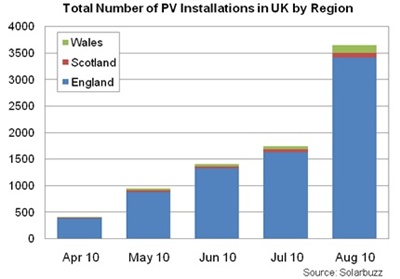 Although the UK’s late arrival to PV means that it has a somewhat fragmented and incomplete industry supply chain in place, there is certainly a PV industry presence. Sharp – one of the world’s leading PV module producers – has operated a European manufacturing base in Wrexham, Wales, since 2004, and earlier this year it announced a £30 million investment to add three new production lines and a teaching facility to the site, doubling its annual module production capacity to 500 MW by early 2011.

Others with a significant UK presence include PV Crystalox Solar, which manufactures silicon ingots at its Oxfordshire plant (as well as wafers in Germany and Asia), and a number of manufacturing equipment suppliers. PV Crystalox is also expanding, with its production capacity also set to reach 500 MW within the next few months.

Net exporter
As such, the UK is at present a significant net exporter of PV technology, with most domestic PV installations either limited micro-generation residential projects, or high-profile schemes such as the giant panel erected at Optic Technium in St Asaph, Wales (see image above).

One of the key requirements now is for the UK’s PV industry to become a more cohesive entity, speaking with a single voice through industry associations. There are signs that this is beginning to happen, given the recent emergence of the “BPVA”, otherwise known as the British PV Association, while last week’s Photonex event brought together a number of parties that will be crucial to the development of a co-ordinated industry effort. Speaking at Photonex, Alastair Wilson from the Electronics, Sensors and Photonics Knowledge Transfer Network (ESPKTN) highlighted a recent strategy workshop on the subject, under the deliberately provocative title “Does photovoltaics have a future in the UK?”

The ESPKTN will soon produce a full report on that workshop, but a number of outcomes are already apparent. One even concerns the very term “photovoltaics” – thought to be a hindrance to consumer awareness about what the technology is really about. As a result, the KTN wants photovoltaics to undergo something of a re-brand to become “solar electricity” (SE), although quite how this will resonate with the newly-formed BPVA remains to be seen.

Other outcomes include recognition that there will be a need to reach out to the UK’s conservative construction industry, and to shift the discussion away from a fixation on photovoltaic technology, and towards the performance of clean energy-generating systems. The ESPKTN is encouraging any interested parties to connect with the rest of the industry via its web site.

Reality check
Also speaking at Photonex, and providing something of a reality check, were Jeremy Harrison from the power supplier E.ON, and Paul Rowley from the Centre for Renewable Energy Systems Technology (CREST) at Loughborough University. E.ON already provides the UK with around 11 per cent of its power, almost entirely through conventional means, and is involved in renewable projects such as the 1 GW London Array off-shore wind farm.

As Harrison points out, power demand peaks in the UK on dark winter nights – unlike southern Europe, where air-conditioning in the summer is what puts the most strain on the electrical grid. As a result, the PV-generated units in the UK are going to be less valuable to the grid. He also suggests that, even with the relatively generous FiT available to householders in the UK, at this stage the high cost of system installation is going to put off plenty of would-be customers. At the current cost and FiT level, Harrison calculates a pay-back period in excess of 12 years for a typical domestic installation – not exactly a no-brainer, particularly if a loan is needed to finance the purchase. “For serious uptake, that payback period needs to be more like two or three years,” he said. 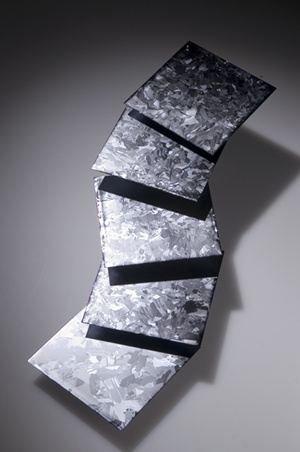 Rowley echoed the call for more cohesion within the UK photovoltaics scene, saying: “I don’t yet see the joined-up thinking in the value chain.” That means getting architects, engineers, standards bodies and technologists together to understand how best to exploit the UK’s specific solar resource, and to focus on total energy yield rather than peak generation figures – much as the KTN has suggested. The good news, says Rowley, is that, over time, the UK’s solar resource is actually a lot more predictable than its wind power, making an investment decision more easily calculable.

Local knowledge
That’s not to say that the vagaries of British weather do not play an important role – the UK’s latitude means that the sun’s position is more variable than in more southerly locations, while irradiance will generally be lower, at 300-500 W/m2. This makes a difference, because most solar products are rated for standard operating conditions of 1000 W/m2, and there is typically a drop-off in conversion efficiency at lower power levels. The changeable nature of British weather also raises a key question about the inverters that are needed to turn solar-generated direct current into grid-friendly alternating current. On a typically showery day, clear blue skies can change to dark cloud and back again within a few seconds, and the impact of such high rates of change on inverter performance is simply not yet known. “We don’t [yet] have enough evidence to show inverter lifetimes,” said Rowley, adding that his CREST colleagues were working on closing this data gap.

But despite the local weather, a lack of appropriate building standards for PV, and the fragmented supply chain, Rowley senses a positive trend. Partly because of the general dislike for wind turbines, particularly in urban locations, he expects photovoltaics to become the favored renewable energy technology among householders and the construction industry. Coupled with the relatively high cost of electricity in the UK, he is convinced of the technology’s ultimate commercial viability.

Add to that the undoubted expertise in next-generation photovoltaic technologies under development in the UK - particularly concentrator systems, and dye-sensitized and organic cells - and there is good reason to suspect that, in spite of its late entry to the market, the simple answer to the ESPKTN’s provocative question is “yes”.