Organic lasers show tremendous promise for sensing the vapours given off by the explosives found in landmines. 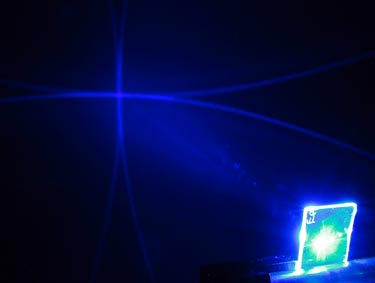 An organic laser capable of detecting the vapours given off by explosives could soon be helping personnel risking life and limb to detect landmines. And as the thin polymer layer in the laser acts as both the gain medium and the sensing element, this work could pave the way to compact and convenient low-cost lasers capable of sensing explosive vapours in a variety situations (Advanced Functional Materials, in press).

"In terms of landmine detection, this could be used as an explosive sensor in a remotely controlled robot," Graham Turnbull from the University of St Andrews, UK, told optics.org. "The technology could also be used at airports where the sensor could be included in the baggage handling system, or at railway stations or even the entrances to buildings."

The polymer-laser-based explosive sensor exploits a very simple effect. When a conjugated polymer comes into contact with vapours released by nitroaromatic-based explosives, photo-induced electron transfer occurs, which quenches the light emitted by the laser.

The St Andrews team starts by fabricating a distributed feedback laser containing a thin film of polyfluorene, a semiconducting polymer more commonly used in printable OLEDs for displays. The polyfluorene laser was then exposed to vapours of DNB in a vacuum chamber at a concentration of 9.8 ppb and its lasing threshold is found to increase from 6.8 to 12.5 µJ due to the quenching effect.

"9.8 ppb is a very low concentration," commented Turnbull. "It is similar to the concentration expected in the air floating above a landmine."

The next step was to investigate how the laser emission changed with time during exposure to the DNB. Ying Yang, a research student working with Graham Turnbull and Ifor Samuel at St Andrews, has shown that the laser's output decreased rapidly by 40% within 46 seconds, with a 20% drop recorded in the first 14 seconds. To reverse the effect, Yang found that the laser would recover within the same time period by flowing nitrogen gas through the chamber to remove the DNB.

"It has previously been shown that polymer lasers can sense nitroaromatic vapours, but this is the first time that the response time of these polymer laser sensors has been explored," commented Turnbull. "We have also explored how far the molecules of the vapour can penetrate into the polymer, which determines how effectively the vapour can cause a change in the laser's output power. This will guide the design of improved sensors as you would like the explosive molecules to diffuse throughout the film to affect all of the light emission."

The research team now hopes to extend the range of materials that the lasers can sense and will investigate making sensors with integrated detectors.