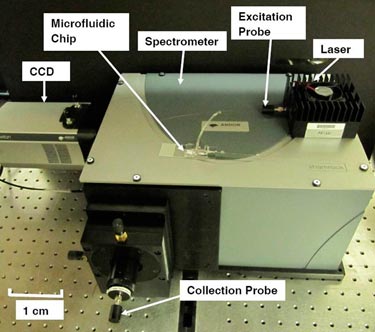 A microfluidic platform that contains a fibre-based Raman spectroscopy system could pave the way towards lab-on-a-chip devices for biological analyte detection and environmental sensing. That's according to its developers from the University of St Andrews, UK, who believe that their fibre-probe-based Raman detection system is the first of its kind (Optics Express 18 7642).

"Our approach makes Raman spectroscopy a viable detection technique for lab-on-a-chip applications," Kishan Dholakia from St Andrews' School of Physics and Astronomy told optics.org. "We believe that this is the first time that a wholly fibre-probe-based Raman detection system has been integrated into a microfluidic chip. This approach increases the portability of the system and is a step forward towards Raman spectroscopy based lab-on-a-chip devices."

In all previous work in this field, research teams have had to rely on bulky Raman microscopes. In essence, the microfluidic chip was simply the sample platform for the bulk optics system. Now, Dholakia and colleagues Praveen Ashok and Gajendra Singh have successfully integrated a Raman probe into a microfluidic chip, which they say offers a number of advantages. 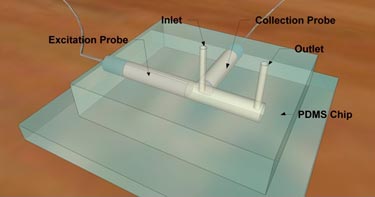 "The first major advantage is that we have a compact and portable system," commented Dholakia. "When the technologies were separate, the Raman signal was acquired through a substrate which had its own background signal. That isn't an issue any more. We also now have an alignment-free design and can acquire data in a clinically relevant acquisition time of 5 seconds."

The physical dimension of the whole system including PDMS chip, Raman probe, laser source, spectrometer and CCD is 60 × 35 × 25 cm. In a proof-of-principle experiment, the system was able to detect urea at physiologically relevant levels in clinically relevant acquisition times.

"We are now trying to detect bioanalytes in blood," said Dholakia. "We may be able to develop online process monitoring devices for simultaneous multiple analyte detection. We hope to gain interest from the commercial sector."