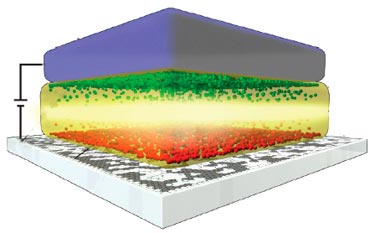 Organic light-emitting diodes (OLEDs) are increasingly being used in everyday applications like televisions, camera displays and mobile phones. However, despite using carbon-based materials as the light-emitting layer, previous devices needed at least one metal electrode. Now, researchers in Sweden and the US have used graphene as the transparent cathode in a device similar to an OLED, called a light-emitting electrochemical cell (LEC). The device is one of the first truly organic, or "plastic" electronic devices.

OLEDs contain an electroluminescent layer that is made of an organic semiconductor material sandwiched between two electrodes, at least one of which is transparent. OLEDs are not only more environmentally friendly and easy to process than conventional light sources, they can also generate photons across a range of colours to produce white light. Devices made from OLEDs run on little electricity too.

Manish Chhowalla's group at Rutgers University in the US began with graphite and oxidized flakes of graphene oxide from the graphite in an acidic solution. After filtering the suspension and transferring the resulting material to a quartz substrate, the film was then reduced and annealed at high temperatures in an oven containing argon/helium.

The researchers sent this "chemically derived graphene", as it is called, to their colleagues at Linkoping and Umea Universities in Sweden. Here, Nathaniel Robinson's team drop-cast a mixture of Super Yellow (a commercial electroluminescent material), PEO polymer and KCF3SO3 (a salt) onto the graphene substrate. Next, the researchers coated a commercially available blend containing a polymer called Clevios S V3 with the graphene composite to make the top electrode in the LEC. 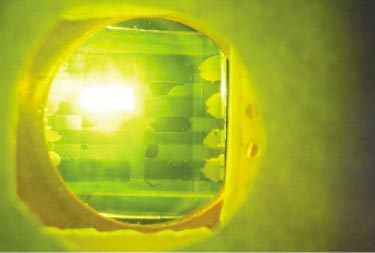 The resulting device, which begins to emit light at just 2.8 V, is an all-organic sandwich structure, similar to an OLED, but it does not contain any metal electrodes. "This also means that it can be much more easily recycled," said Robinson. The structure could be used in displays, just like OLEDs.

The researchers calculated the quantum efficiency and the power conversion efficiency of the device as 9 cd/A and 5 lm/W, respectively, at 4 V. They say that these are "rather impressive values, close to the state-of-the-art for conjugated polymer LEC devices".

And that's not all: the team also tested an LEC where graphene was the anode. In principle, this means that graphene could be used as both electrodes in the LEC.

The Swedish group is now investigating why the graphene works as well as it does and is also attempting to improve the device's lifetime and efficiency. Meanwhile, back at Rutgers, Chhowalla and co-workers are continuing to improve the graphene-fabrication process, particularly with regards to using flexible substrates.

The work was published in ACS Nano.